New York Mets voice Ron Darling announced Saturday night he will take a medical leave from calling games on SNY to have surgery to remove a mass in his chest, reports The NY Post.

In recent weeks, Darling has been in the embroiled in controversy after the publication of his new book, “108 Stitches,” in which he accused then-Mets teammate Lenny Dykstra of directing racist comments toward the Red Sox’s Dennis “Oil Can” Boyd during Game 3 of the 1986 World Series.

Dykstra is suing Darling, along with the book’s publisher, St. Martin’s Press and MacMillian Publishing Group, over the allegation.

Darling, 57, is hopeful that the surgery reveals no serious issues and that he can return to work next month. People with direct knowledge of the situation said the timing of the procedure has nothing to do with the flare up with Dykstra. Darling addressed his upcoming absence on the air Saturday night.

Darling and fellow 1986 teammate and play-by-player Gary Cohen, along with Keith Hernandez, have been acclaimed as perhaps baseball’s best NY broadcast team.

“My health is the top priority right now for my family and I,” said Darling. “I’m looking forward to being back in the booth with our crew and my friends Gary and Keith as soon as I can.” 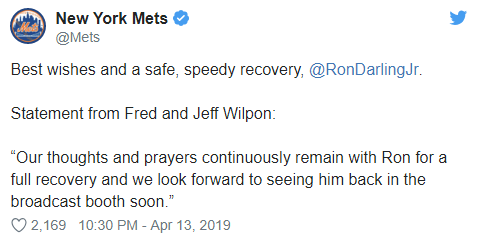 Todd Zeile, SNY’s new main studio analyst, will step into Darling’s place on games. Nelson Figueroa and Jim Duquette will be in studio.

“Doctors have been monitoring Darling over the past few months and tests revealed a mass on his chest,” SNY said. “Darling is now scheduled for a medical procedure next week. The doctors have told him that if there are no complications he should be back in the booth alongside Gary Cohen and Keith Hernandez next month.”
Posted 1:36:00 AM