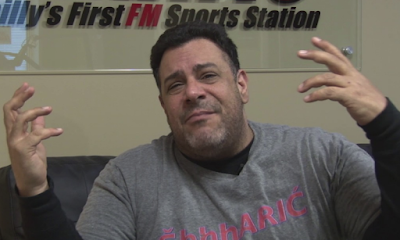 Gargano's last day on the show was Thursday, according to philly.com citing sources with knowledge of the situation. It's unclear if Gargano will remain at the station in a different timeslot.

A source confirmed Crossing Broad's report that Farzetta will take over the morning show, setting him up to take on his former boss and mentor Angelo Cataldi head-to-head. Farzetta told the Inquirer and Daily News last month he stepped down from WIP after 13 years to focus on his full-time job at NBC Sports Philadelphia, where he hosts Philly Sports Talk with Amy Fadool. His last day at WIP was June 15, and it's unclear when he'll host his first show at The Fanatic.

It's unclear if the rest of the morning show's crew, which features Cooney and producer Jamie Lynch (know to listeners as "The Bro") will be impacted by the switch to Farzetta.

Gargano left WIP and joined The Fanatic in April 2015 to launch the station's first local sports talk show, which replaced ESPN's syndicated Mike and Mike show. But after starting off strong and at one point presenting a serious challenge to longtime ratings champion Cataldi, Gargano's show endured several roster changes.

Ratings have been an issue for Gargano's show. During the spring ratings book, Cataldi and the WIP morning show more than doubled The Fanatics's ratings among men ages 25 to 54. Cataldi finished the quarter in second place, while Gargano finished a distant fifth in the market.
Posted 4:00:00 AM