Hosted by Rivera, one of America’s most enduring broadcasters and Fox News correspondent-at-large, Geraldo in Cleveland will discuss a range of local and national headlines, including the latest business, political and pop culture news.

“Cleveland is my home now and so is WTAM,” said the Emmy and Peabody Award-winning Rivera. “History put me here by random chance and now I am a part of this great city where I fell in love with my wife of 15 years, Erica Rivera. I will continue to work on a national level with Fox News, and I look forward to sharing conversations and perspective locally with you every day. This is just the beginning of what I hope will be a long relationship with WTAM, iHeartMedia, and most importantly – YOU.”

“Geraldo Rivera is a once-in-a-generation broadcaster, storied journalist and tireless philanthropist,” said Keith Hotchkiss, President of iHeartMedia’s North Ohio Region. “Bringing Geraldo to WTAM and making him part of an already solid foundation of talk show hosts and performers helps chart a new path for the future of WTAM and redefines our position in the Cleveland community.” 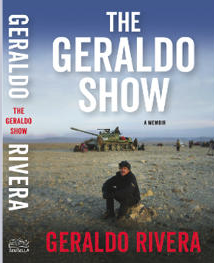 Rivera began his 48-year career as a television reporter at WABC-TV in New York and was a member of the original cast of ABC’s Good Morning America. He had an eight-year association with ABC’s 20/20 as an investigative reporter and produced and hosted The Geraldo Rivera Show for 11 years. Prior to joining Fox News, Rivera served as host of CNBC’s number-one rated prime time show, Rivera Live, where his critically-acclaimed coverage of the O.J. Simpson civil trial verdict set an all-time CNBC rating record. Rivera is a veteran foreign correspondent who has been on the frontlines of many international conflicts since 1973.

iHeartMedia Cleveland has also added Jensen Lewis to the WTAM line-up. Lewis, a former pitcher for the Cleveland Indians and current television broadcast host for the team, will join Nick Camino and the legendary Mike Trivisonno on the newly formatted Sports Feed 2.0 program, weekdays from 6 p.m. to 7 p.m.