Attorneys for the media company also want a federal judge to issue an injunction barring the longtime radio hosts from hosting their current internet-based radio show, according to MLive.com.

Cumulus attorneys, in two mid-April filings, state Burke and Blondie, whose real name is Bonnie Belger-Holzhei, are in violation of non-compete and non-solicitation clauses in their employment agreements that they entered into with Cumulus and/or Citadel Broadcasting, the former owner of WHNN-FM.

The attorneys allege the hosts have "repeatedly and intentionally" violated those agreements since their Jan. 15 firing by using Cumulus' "confidential, proprietary information" as they broadcast "Johnny and Blondie Live" and solicit "Cumulus' sponsors and employees."

The hosts, Cumulus alleges, "have recently initiated a course of conduct that can only be interpreted as intentional 'taunting' of Cumulus, underscoring the bad faith and malice behind (their) actions."

The counter-complaint and injunction motion, filed by Birmingham attorney Thomas Paxton, come after age-discrimination lawsuits were filed by Burke, 61, and Belger-Holzhei, 53, against their former employer.

Cumulus filed answers to the lawsuits and counter-complaints on Monday, April 11, and filed the injunction motion on Wednesday, April 13. In addition to the injunction, Cumulus also is seeking damages "three times the amount" sustained as well as punitive damages. 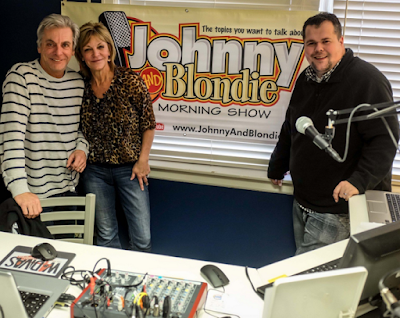 The filings refer to the new show featuring Burke and Belger-Holzhei as a "competing show," but Mastromarco said that is different than what Cumulus officials told the hosts when they fired them as a part of a "format evolution" for the station that saw it change from a classic hits station into one that plays more current music. The station formerly known as "Oldies 96" became "My 96.1" at that time.
Posted 3:35:00 AM