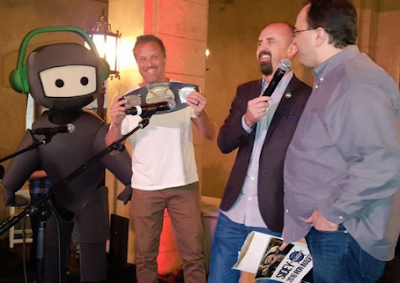 Iron Imager is the first and only competition of its kind. Justin Case, Director of Programming and Imaging for Benztown, awarded the championship belt to Andersen at the Westwood One Awards Luncheon held on Friday, April 15, at 1:00 p.m.

Andersen and Kelly demonstrated their world-class imaging skills by producing a 60-second station ID on Thursday, April 14, for a format unannounced until the day of the live competition. This year’s format was Political Talk. The Iron Imager finalists used elements from one of Benztown’s 20 production libraries and an original script created by the Benztown team. Legendary voiceover talent, Joe Cipriano, emceed the Iron Imager competition.

Benztown is donating an honorarium to each of the four Iron Imager judges’ charities of choice. The “fifth” judge was the readers of Benztown’s imaging blog (http://blog.benztown.com/imaging/), who voted online.

Judges for 2016 Iron Imager were:
Dave “Chachi” Denes, Benztown President, said: "I want to thank Dan and Sidey who are both remarkable talent for putting on an incredible show!  Their participation helps raise the profile and the importance of imaging throughout the industry.”

Iron Imager 2016 Champion “Sideshow” Mike Andersen said: “It's been a pear-shaped adventure here in LA. One week of absolute rock n roll! The Benztown crew are the best of the best and I've enjoyed every minute. Dan Kelly is a legend. But I'm happy to be the guy that's de-throned the champ. My only regret was ripping my favourite jeans jumping over a fence to get to a rooftop pool at 5am. Cue Motley Crue's 'Kickstart my heart', fade to black.”

Dan Kelly, 2013, 2014 and 2015 Iron Imager Champion, said: “DAMNIT! Umm…I mean. Congrats to Sidey! Really great job from him under lots of pressure, a ticking clock and using somebody else’s ProTools system! Especially great job considering he’s Australian and knows next to nothing about American politics! He had quite a week in the USA! It’s been a lot of fun and an honor to hold the belt three years in a row. Iron Imager is a great contest, putting the spotlight on imaging and imaging guys…highlighting the crazy job we do. It’s a pressure-filled contest, but lots of fun! Huge thanks to Chachi, Andy, Masa, Chris, Justin, Kevin, Bonnie, Syd, Shane and everybody at Benztown for being such awesome people and good friends. They’re a special group. I guess I’m in Iron Retirement for now!”
Posted 3:24:00 AM