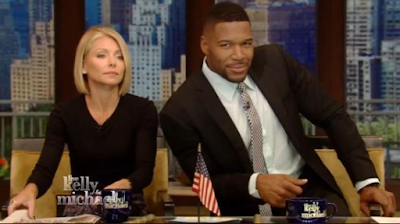 Kelly Ripa is still livid that Strahan and network brass waited until just after taping Tuesday morning to tell her he would be leaving the show in September — alerting her mere minutes before announcing the move publicly. 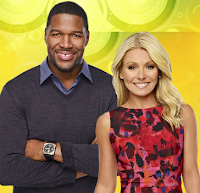 But, according to The NY Post the tension between the pair is hardly a surprise. For all their on-air chemistry, Ripa, 45, and Strahan, 44, were far from the closest of colleagues, insiders dished.
The pair “did not get along. It was all for the show,’’ a Ripa source said. “They could not stand each other, and whenever they communicated off-camera, it was always through their reps.”

Strahan was already doing two days a week at “GMA” on top of co-hosting “Live,” and the stress wore on the 6-foot-5 Hall of Fame Giants defensive end, sources said.

“He was having temper tantrums. He’d lose it, yelling at [Ripa] and [“Live” executive producer Michael] Gelman.

“He acted like he was in a locker room, not a dressing room.”

Another source noted that Ripa helped get Strahan the job.

“She got [Strahan] started, he stepped over her without an FYI, and now a nice morning show has become ABC’s newest drama,” quipped the source.

But a Strahan source defended the former Giants star, insisting that he had been under strict orders not to tell anyone — even his co-star — until Tuesday that he was moving to GMA.

TMZ reports Regis spoke to photogs in NYC and made it clear Kelly should've gotten a heads up about Disney's plan to move Strahan from 'Live' to 'GMA.' It's an interesting perspective ... since Philbin famously told Kelly about HIS departure at the last minute.

Meanwhile, Ripa alienating lots of people on 'Live,' because they believe she's jeopardizing their jobs by refusing to work, accoridng to TMZ.

Production crew members believe ABC execs are weighing the benefits of either killing the show or moving it to a later hour so they can add a third hour of 'GMA.'

These crew members are grousing, the longer Kelly stays out, the more damage it will do to 'Live' and the greater the chance that they'll be replaced by 'GMA.' The crew generally likes Kelly, but many of them think what they call "her tantrum" is hurting the show.
Posted 4:01:00 AM