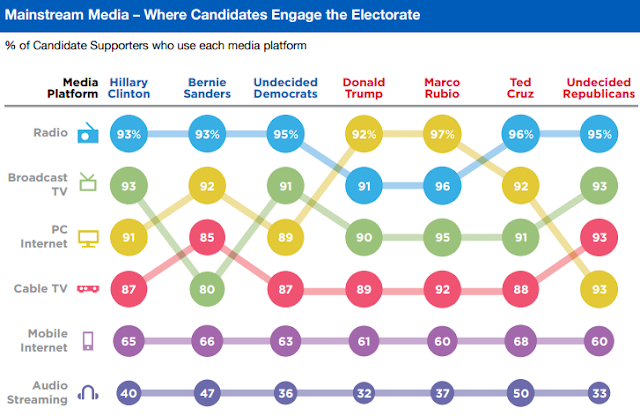 Radio hasn't historically been the first stop for candidates seeking voters. But for the 2016 election cycle, iHeartMedia is looking to get a bigger chunk of political ad dollars by stealing share from TV, according to AdAge.

iHM has built a new political ad sales and strategy division, charged with convincing political buyers that as TV's reach dwindles, radio can be a more cost-effective option for targeting voters.

"Radio has never gotten its fair share of political spend," said Bob Pittman, chairman-CEO, iHeartMedia. "But a lot of that was our fault, because we tried selling what we had instead of what they needed."

But radio's political ad revenue is likely to grow 10% to 20% this year, he predicted. And he expects iHM to be an important driver of that growth.

Campaigns should allocate 15% to 20% of broadcast budgets to radio or risk "leaving some voters on the table," according to Pittman. "It's not just that radio's cost per voter impression is much lower, enabling greater frequency; radio's flexibility also makes it easier to turn on a dime and pivot on key messaging whenever campaigns need it."


The majority of political advertising on radio historically went to talk news, but the ability to use data to find audiences wherever they are listening opens the door to other formats, Mr. Passwaiter said.

Pittman bolsters his pitch with Nielsen data showing that broadcast radio reached 93% of the population, while TV reached 85% in the third quarter. And when it comes to reaching millennials, radio reached 92%, ranking first. TV comes in third, reaching 73%.

"TV no longer has the reach it did; radio is a lot cheaper than TV and in many cases digital," Mr. Pittman said.

Katz Radio Group has commissioned Nielsen to survey a representative sample of registered voters across 10 states in the weeks leading up to their Presidential primary elections in February, March and April 2016.