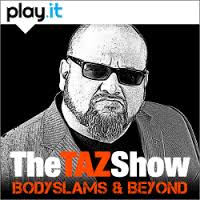 CBS Radio Wednesday announced a special edition of The Taz Show: Bodyslams & Beyond airing on Sunday, Apr. 3 from 11:00PM – 2:00AM, EDT.

The show will feature Taz’s unique thoughts, colorful commentary and more immediately after the event.  Fans can catch this episode of The Taz Show by listening over-the-air, streaming online, and using the CBS Sports and Radio.com apps for a variety of mobile devices, as well as watching a live video stream of the show on TazShow.com.  The special will also be offered on-demand after the show ends, and will serve as the Monday, Apr. 4 edition of The Taz Show.

In addition to airing on CBS Sports Radio on over 200 affiliates, more than 15 CBS Radio Sports stations including  Sports Radio WFAN 660 AM and 101.9 FM in New York, 670 The Score in Chicago, 105.3 The Fan in Dallas/Fort-Worth, 106.7 The Fan in Washington, D.C., and Sportsradio 94WIP in Philadelphia will broadcast the program live over-the-air and online.  For more information and the full list of stations, fans can go to TazShow.com.

“There will be no better way to celebrate the biggest night in sports entertainment than by bringing Taz’s one of a kind personality and analysis to the fans across America as soon as the final bell rings in Dallas,” said Chris Oliviero, Executive Vice President, Programming, CBS RADIO. “The passion of this audience is incredible and they deserve an outlet on the nation’s premier sports radio stations to have their say and be heard.”
Posted 3:06:00 AM