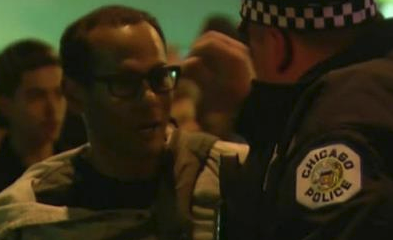 Sopan Deb, a campaign embed who has been following Trump's campaign since it launched, was detained in the chaos outside of the site of the Republican front-runner's rally. According to Debs' own video he appears to be thrown to the ground while attempting to film police and protesters on the street. On the video he identifies himself as a member of the media.

Another video of part of the incident shot by Fox News shows Deb on the ground surrounded by officers before he's lifted, his arms in handcuffs. An officer is clearly shown holding Deb's camera and equipment.

According to Politico, Deb was charged with resisting arrest, though CBS said in its own report on the incident that the video clearly shows this was not the case.
Posted 7:28:00 AM