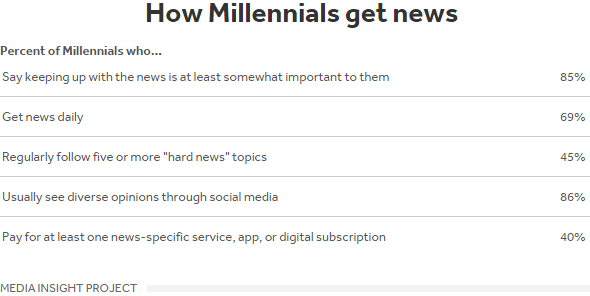 For years, researchers and social critics have worried that the newest generation of American adults is less interested in news than those who grew up in the pre-digital age.

A new comprehensive study that looks closely at how people learn about the world on these different devices and platforms finds that this newest generation of American adults is anything but “newsless,” passive, or civically uninterested.

Millennials consume news and information in strikingly different ways than previous generations, and their paths to discovery are more nuanced and varied than some may have imagined, according to the new study by the Media Insight Project, a collaboration of the American Press Institute and the Associated Press-NORC Center for Public Affairs Research.

This generation tends not to consume news in discrete sessions or by going directly to news providers. Instead, news and information are woven into an often continuous but mindful way that Millennials connect to the world generally, which mixes news with social connection, problem solving, social action, and entertainment.

Rather than having a narrowing effect on what Millennials know about, however, the data suggest this form of discovery may widen awareness.

Virtually all Millennials, for instance, regularly consume a mix of hard news, lifestyle news, and practical “news you can use,” the study finds. Millennials are more likely to report following politics, crime, technology, their local community, and social issues than report following popular culture and celebrities, or style and fashion. Fully 45 percent of these young adults regularly follow five or more “hard news” topics.

Among the study’s findings: