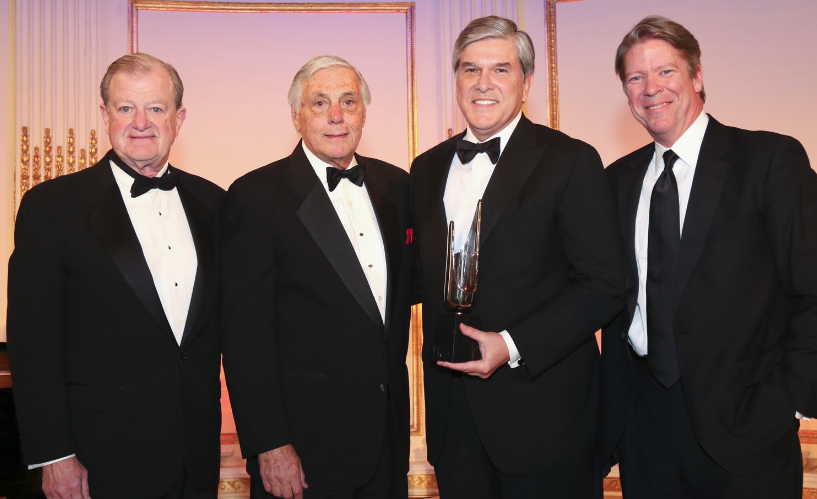 More than $250,000 was raised at the Broadcasters Foundation of America 2015 Golden Mike Award Dinner, honoring Senator Gordon Smith, President and Chief Executive Officer of the National Association of Broadcasters (NAB). The Golden Mike Award was presented to Smith at a black-tie fundraiser to benefit the Foundation’s mission of helping broadcasters in need.  More than 250 television and radio executives were in attendance on Monday evening at the Plaza Hotel in New York City.

The evening was hosted by CBS News’ Chief White House Correspondent Major Garrett, who reports for all CBS News broadcasts and platforms.  The presenters were Jeff Smulyan, Founder and Chairman of the Board of Emmis Communications Corporation, and David Barrett, Director of Hearst Corporation.

The Broadcasters Foundation also debuted its new video, featuring grant recipients who shared their personal stories and expressed how the Foundation has made a difference in their lives. The video is on the Foundation’s website at www.broadcastersfoundation.org.

The Broadcasters Foundation of America has distributed millions of dollars in aid to thousands of broadcasters and their families who lost their livelihood through a catastrophic event, debilitating disease, or unforeseen family tragedy.  Individual membership is only $150 a year and can make a difference in the life of a colleague who has fallen on desperate times.  Donations can be made as a personal gift to the Foundation’s Guardian Fund, and corporate contributions are accepted through the Angel Initiative.  In addition, a bequest may be made through the Foundation’s Legacy Society.

For more information on applying for a grant or making a donation, please visit www.broadcastersfoundation.org, or call 212-373-8250.
Posted 3:01:00 AM