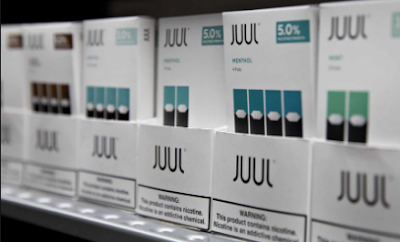 Juul Labs Inc. named a new top executive and vowed to end advertising and lobbying that had raised the ire of lawmakers, health officials and parents, as the highly valued private e-cigarette company confronts a growing public backlash.

AdAge reports the company said in a statement that Chief Executive Officer Kevin Burns will step down, to be succeeded by former Altria Group Inc. executive K.C. Crosthwaite, effective immediately. Crosthwaite had previously served as chief growth officer at the Marlboro maker, which took a $12.8 billion stake in Juul last year, and served as Altria’s observer on Juul’s board.

At the same time on Wednesday, Altria said it was ending merger talks with fellow tobacco giant Philip Morris International Inc. The companies said in a statement that they would focus on another smoke-free technology called IQOS in the U.S. electronic-cigarette market. Shares of Philip Morris jumped more than 7 percent in early trading in New York, while Altria rose about 2.4 percent.

Juul, maker of the top-selling e-cigarette device in the U.S., has found itself at the center of an increasing controversy over vaping. A mysterious lung illness has killed seven people and sickened more than 500 others in recent months, and U.S. health officials have said that vaping among youth has reached epidemic proportions.
Posted 3:52:00 AM