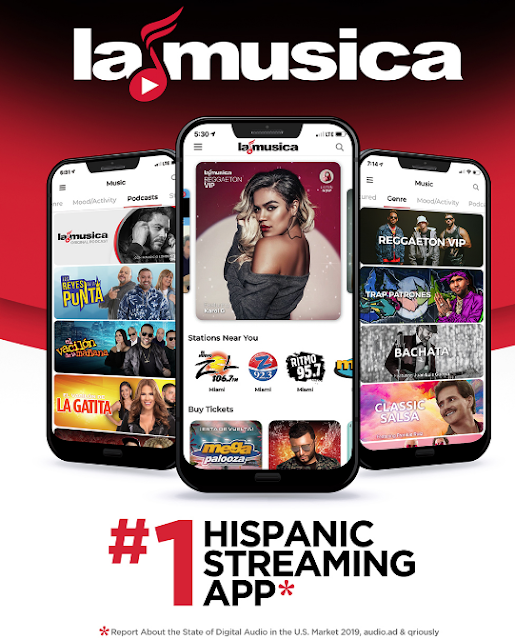 The LaMusica digital platform has been identified as the Top Hispanic-focused online streaming site as well as the Top Hispanic radio app among Latino users, according to a recently published study, "Report About the State of Digital Audio in the U.S. Hispanic Market 2019."

The newly released Report, drawing upon hundreds of in-depth respondent interviews, focused on identifying the digital audio consumption habits of the U.S. Hispanic market, including the content preferences of Spanish-speaking users as well as the purchasing characteristics of consumer products and services advertised in digital audio environments.

"LaMusica's top ranking in this report demonstrates the power of our brand and our growing audience across all digital platforms," stated Bianca Alarcón, Head of Content Development at LaMusica. "The Hispanic community has a deep cultural connection to music and LaMusica is today's ideal vehicle for experiencing the fascinating world of Latin entertainment. Our ranking as the top Hispanic-targeted streaming site among Latino users comes after years of hard work leveraging our leading station brands while building a unique mobile and digital entertainment platform. We see continued strong growth for the LaMusica brand in the years to come and are excited to continue delivering innovative and engaging experiences to our rapidly expanding user base," she added.


The top ranking for LaMusica comes at a time of impressive growth for SBS' digital properties: