Country WBYT 100.7 FM in South Bend has issued a statement in response to social media backlash following the departure of Jim Mackey, who was co-host of the popular local radio show Mackey and Miles in the Morning with Deb Miles, reports monstersandcritics.com.

The controversy over Mackey’s departure was sparked by claims that radio host was fired for failing to attend B100 25th Anniversary Concert instead spending the weekend with his family, celebrating his daughter’s wedding.

While the radio station did not comment on claims that Mackey was fired for missing the B100 Concert, the station denied claims that they were not supportive of Mackey wanting to be with his family on the occasion of his daughter’s wedding. 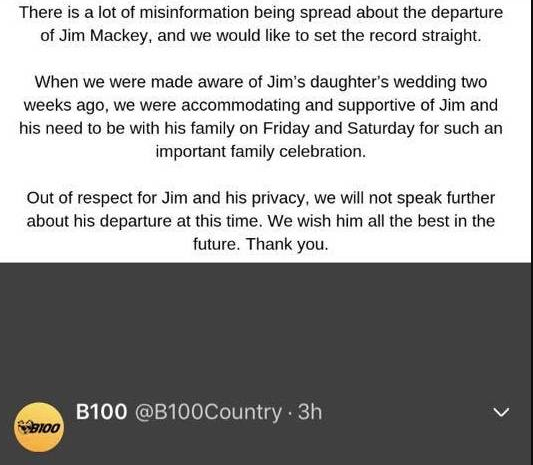 According to the statement, management approved for Mackey to be with his family for the important occasion on Friday and Saturday. However, the wedding ceremony was held on Sunday of the weekend in concern.

Several fans argued that Mackey had the duty to be with his family on the day of his daughter’s wedding because it was a once-in-a-lifetime event.

“You were supportive of being with family Friday and Saturday, but if the wedding itself was Sunday then family first,” an angry fan wrote on Facebook. “A country station would understand this."

Some fans raised questions about the station’s claim that they were 'aware' of the wedding only two weeks before, saying that many fans who listened to Mackey’s show had known about it much earlier because Mackey had talked about it during his show.

Several fans also threatened to boycott the radio station while others demanded that the station reinstate Mackey and apologize to him over the way he was treated.

Jim Mackey was the co-host of B100’s Mackey and Miles in the Morning with Deb Miles.

His career includes stops in Madison, WI; Springfield, MO; San Antonio, TX, and Peoria, IL, before joining B100 some years back.
Posted 6:37:00 AM