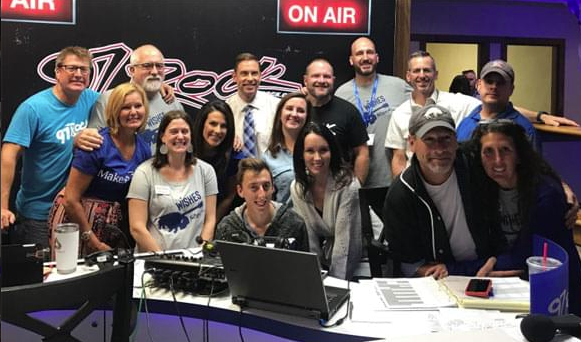 Cumulus Media announces that WGRF 97 Rock in Buffalo, NY, raised over $300,000 - a station record - for the Make-A-Wish Foundation of Western New York to grant wishes to children battling critical illnesses.

The funds were raised through the station’s 25th Annual Make-A-Wish Radiothon held on Thursday, September 12th from 6am through 10am on Friday, September 13th. The 28-hour radiothon was broadcast on location at the Eastern Hills Mall in Williamsville, NY. News 4 Buffalo provided additional media support.

Jim Riley, Vice President/Market Manager, Cumulus Buffalo, said: “It’s a real honor to work with all the people who came together for 2019 Make-A-Wish Radiothon. Because Western New Yorkers responded so generously, Make-A-Wish will be putting smiles on faces and changing a lot of lives over the next year. A special thanks to Larry Norton for providing the spark that started this thing 25 years ago!”

John Hager, Program Director, Cumulus Buffalo, said: “Twenty-five years is a long time for an annual event, especially in radio. It’s a testament to 97 Rock’s heritage in the market and the special relationship it has with our listeners that we’re able to set such an impressive record.”

Ben Marchione, Regional Director, Wish Uncle, Make-A-Wish Foundation of Western New York, said: “25 years is an incredible accomplishment, and has helped to transform countless lives through the power of a wish. Make-A-Wish is committed to hope, strength and transformation and all dollars raised greatly impact the healing and transformative power wishes have on children battling critical illnesses.”
Posted 1:16:00 AM