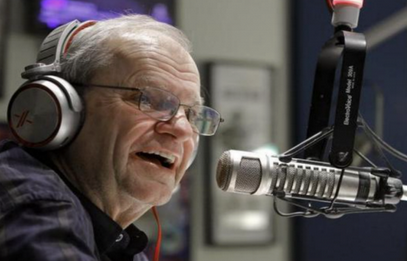 "Terry Dorsey never had a bad day, and that kind of attitude really rubbed off on people," according to Dan Bennett, regional VP for Cumulus Media. "He was not only was a great talent but a great person, and that's the biggest loss."

Monday's Hawkeye and Dorsey in the Morning program on KSCS 96.3 FM was a tribute to Dorsey.

According to the Fort Worth Star-Telegram, Country musicians including Pat Green, Brad Paisley and Joe Don Rooney of Rascal Flatts called into the Hawkeye and Dorsey show to share memories, and local-media personalities such as WFAA/Channel 8’s Ron Corning and Alexa Conomos dropped in, as did former members of “The Dorsey Gang” such as Rebecca Carrell (known on-air as Rebecca).

But many of the memories belong to Mark “Hawkeye” Louis, who worked side by side with Dorsey for 26 years, till Dorsey’s retirement in December, and to the show’s producer of four years, “Trapper” John Morris.

Louis said that he received a call Saturday night from Dorsey’s stepdaughter giving him the news, but that he and the station were asked not to announce anything till Sunday morning because the family wanted to make sure all of Dorsey’s relatives were notified. The station posted Louis’ announcement of Dorsey’s death shortly before noon Sunday.

“He was at home,” Louis said. “His wife had just talked to him a few minutes before, and she was cooking him dinner. She walked back into the kitchen, and her daughter came out to say something to Terry, and he had passed away. It had been like 10 minutes. It was that fast. It was sudden and it was peaceful.”

The show was designed as a celebration of Dorsey’s life, and while callers and visitors recalled Dorsey’s guy-next-door humility and his work ethic, there were also many recollections of his humor.