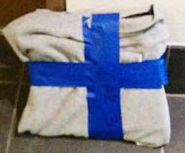 A false bomb scare led to an evacuation Wednesday of the Cumulus Media NYC cluster.  Everyone on the 17th floor broadcast facilities at Madison Square Garden was told to leave after a suspicious package was discovered.

The evacuation affected staffers at N/T WABC, Country WNSH and FM 103.9.  However, WABC's Curtis Slwia and Ron Kuby refused to leave and continued with their show, commercial-free, sans their producer and board op.  The package turned out to be harmless.