Republicans’ distrust of the media and their visceral fears of a Democratic win are at an all-time high, according to a study from the Wason Center for Public Policy at Christopher Newport University.

“President Trump’s ‘war on the press’ appears to be working,” according to the study, released Tuesday and written by Wason Center Assistant Director Rachel Bitecofer. It shows that 57 percent of its respondents believe “major news organizations publish fake news stories for political purposes” but that number jumps to 86 percent among Republicans, with 45 percent of them rating the statement a 10 out of 10, its highest level of severity.

Nearly 70 percent of Democrats disagree, according to Courthouse News.

Bitecofer said in an interview that trust of the press was in decline before Trump took office, but that number has shot up dramatically since January 2017. 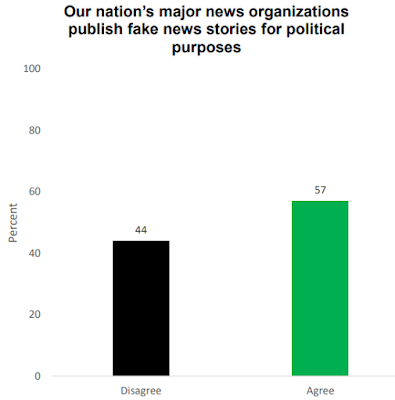 “We get ‘number numb,’” she said, adding that her poll puts historic papers of record, Pulitzer prize-winning publicans, into the fake news category for the largest swath of the American public to date.

“It’s not because of some nut job on fringe radio,” she said. “It’s because for two years the man in the Oval Office, with the presidential seal, has been telling them it’s so.”

Bitecofer said she was astounded by another number from her polling as well: 71 percent of Republicans think the views held by Democrats “threaten the well-being of the country.”
Posted 1:50:00 AM