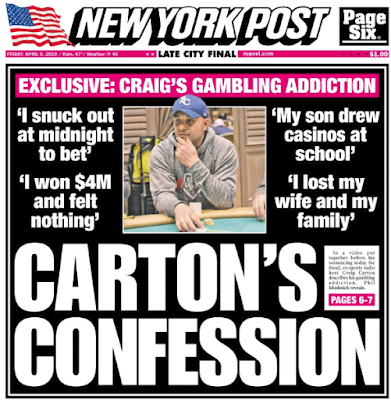 Former WFAN sports radio host Craig Carton was sentenced to three and a half years in prison in a nearly $7 million ticket resale scam meant to pay off his gambling debts — as the judge admitted she was a fan before haranguing him.

Then, she laced into him.

“Your marriage is over, your kids are terrified … reputation in tatters,” she said, as the dad of four sat expressionless. “Craig Carton, you have indeed descended into a hell of your own making.”

Carton, who rose to fame as the brash half of WFAN’s “Boomer and Carton” show, convinced deep-pocketed hedge funders to plunk down millions of dollars for blocks of tickets to Adele, Metallica and Barbra Streisand shows.

He promised big returns on resales — but never delivered.

Instead, Carton kept about $4.6 million for himself, using the cash in a Ponzi-like scheme to pay off debts he accrued as part of a gambling addiction gone awry.

In court, as he begged for a no-prison sentence, Carton admitted he was driven to a life of crime by “demons.”

Carton faced up to 45 years in prison after he was convicted last November of conspiracy, wire fraud and securities fraud.

He collected millions of dollars from investors, pretending he had access to VIP tickets to sporting events and concerts.

But in reality, he used that money to pay off gambling debts and landscaping bills.
Posted 1:45:00 PM