NRG Media has announced the launching of a new mornig show for it's CHR KOPW Power 1056.9 FM in Omaha. 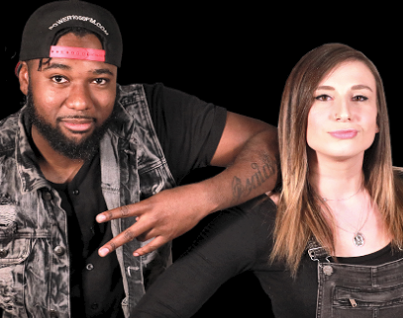 "Chef West And The Morning Scramble" featuring Tay Westberry (left) and Alyssa Siebken will launch on Monday, April 8 at 6am. Westberry, previously known as Mr. West, was host of the Blackout on KOPW from 7pm-midnight. Siebken has a history in the music industry and appeared on season 13 (2014) of "American Idol." She currently performs all around the metro area and has opened for Ben Rector and Jake Miller.

Power 106.9 Program Director Caleb Farnell said, "Tay has his finger firmly on the pulse of the Power listener, and Alyssa will be able to bring a valuable perspective to the show."

NRG Media Market Manager Mark Shecterle added, "We have been looking for the right combination to bring a local and live morning show to Power 106.9, and match the performance level of the rest of the station. We have found that in Tay and Alyssa."
Posted 4:14:00 AM