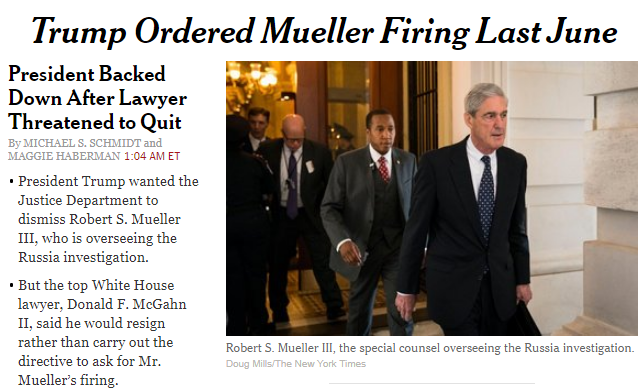 Trump pushed back against the report, without addressing the specific allegation, as he arrived Friday at the site of the World Economic Forum in Davos, Switzerland.

McGahn said he would not deliver the order to the Justice Department, according to The Times, which cites four people familiar with the request by the president.

Trump argued at the time that Mueller could not be fair because of a dispute over golf club fees that he said Mueller owed at a Trump golf club in Sterling, Virginia. The president also believed Mueller had a conflict of interest because he worked for the same law firm that was representing Trump’s son-in-law and adviser Jared Kushner.

The NYPost reports the report comes as Mueller moves ever closer to interviewing Trump himself. The president said Wednesday that he would gladly testify under oath — although a White House official quickly said afterward that Trump did not mean he was volunteering to testify.
Posted 4:44:00 AM