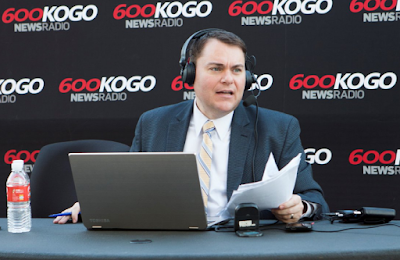 iHeartMedia San Diego announced Friday that it has renewed its agreement with Carl DeMaio to host The DeMaio Report for News Radio KOGO 600 AM. DeMaio will continue to broadcast weekdays 3 – 6 p.m.

“When we started The DeMaio Report, we wanted a forum for San Diegans to share dialogue about important issues and also a vehicle for taking action on problems; I’m thrilled we are accomplishing both goals,” said DeMaio. “I’m excited by the impact we’ve already had on important issues like the California Gas Tax and look forward to tackling many more issues in the years to come.”

Prior to broadcasting, DeMaio built a successful business and political career with a focus on holding government accountable, and offering creative solutions to public challenges. In 2008, he was elected to the San Diego City Council. When the city was facing an uncertain financial future, DeMaio’s Roadmap to Recovery reform plan was instrumental in fixing San Diego’s debt issues. In addition to hosting his daily news and talk show on News Radio 600 KOGO, DeMaio tackles state-wide, fiscal reform policy in his role as Chairman of Reform California and the Transitions in Governance Project at the Performance Institute.

“Carl DeMaio is a staple in the San Diego community and we’re excited that he has agreed to continue making a difference on the airwaves with The DeMaio Report,” said Melissa Forrest, President, iHeartMedia San Diego/Riverside. “The show has engaged and encouraged listeners to take a stand in the political landscape and I’m excited to see what more will be accomplished.”
Posted 5:53:00 AM