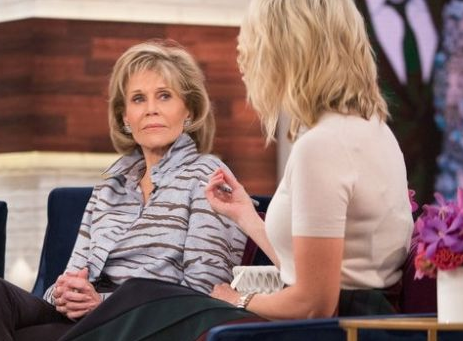 In an unusual broadside during NBC’s morning hours on Monday, Megyn Kelly blasted Jane Fonda, the 80-year-old Hollywood eminence who has been critical of the NBC host in recent months, according to The NYTimes.

“When she first complained publicly after the program — and repeatedly — I chose to say nothing, as my general philosophy is what other people think of me is none of my business,” Kelly said, giving NBC viewers a glimpse of her old Fox News persona. “However, Fonda was at it again last week, including right here on NBC, and then again elsewhere. So it’s time to address the ‘poor me’ routine.”

The Kelly-Fonda skirmish began in September, when Kelly asked about her use of plastic surgery in the first week of “Megyn Kelly Today.” Fonda seemed thrown by the question, and the clip of the interview went viral, becoming symbolic of Ms. Kelly’s rocky transition from hard-hitting cable news prime time anchor to sunny morning host.

Fonda has brought up the interview twice in the last week — during a “Today” appearance with co-anchors Savannah Guthrie and Hoda Kotb, and in a Variety interview over the weekend.

“I was stunned,” Ms. Fonda said of the question. “It was so inappropriate. It showed that she’s not that good an interviewer.”


“And now, a word on Jane Fonda …who appears to be fixated on an exchange I had with her *months ago* on this show” #MegynTODAY pic.twitter.com/jmUMlGFaJr
— Megyn Kelly TODAY (@MegynTODAY) January 22, 2018

In the final 10 minutes of “Megyn Kelly Today,” she reeled off clip after clip, “Daily Show”-style, of Ms. Fonda talking openly about her plastic surgery in past interviews.

“Fonda was on to promote a film about aging,” Ms. Kelly said. “For years she has spoken openly about her joy in giving a cultural face to older women. Well, the truth is, most older women look nothing like Fonda, who is now 80.”

Ms. Kelly also invoked Ms. Fonda’s nickname from the cultural wars of five decades ago — “Hanoi Jane” — adding that it had been bestowed upon the actress because she had tried to “shame American troops.”

“By the way, she still says she’s not proud of America,” Ms. Kelly said. “So the moral indignation is a little much. She put her plastic surgery out there. She said she wanted to discuss the plight of older women in America. And, honestly, she has no business lecturing anyone on what qualifies as offensive.”
Posted 3:44:00 AM