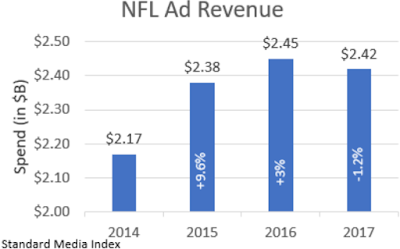 Advertising revenue from in-game NFL programming declined 1.2% to $2.42 billion during the 2017 regular season, according to Standard Media Index, as the league feels the impact of declining viewership.

SMI’s figures include NFL advertising across NBC, CBS, FOX and ESPN, from Sept. 7 to Dec. 31, The Wall Street Journal reports.

The price of 30-second spots increased 1.2% from $499,000 to $505,000, according to SMI. At the same time, the delivery of “make goods” grew from 21% to 23% of the units due to lower ratings. Media companies typically give advertisers make goods, or extra commercial space, when they don’t hit their agreed-upon audience or ratings targets.

“For the first time since we have been tracking the market we saw a slight drop of in-game dollars,” said SMI Chief Executive James Fennessy in a statement. “Despite a fairly significant fall in ratings, CPM’s were strong and demand continued to be high.”

Viewership of NFL games was down 9.7% compared with the 2016 regular season, according to Nielsen. Industry insiders have chalked up the ratings woes to a range of possible factors, from off-the-field controversies and backlash to players’ protests during the national anthem to there being too much football on TV. Many believe cord-cutting has led to a structural and long-term downshift in viewing.
Posted 4:24:00 AM