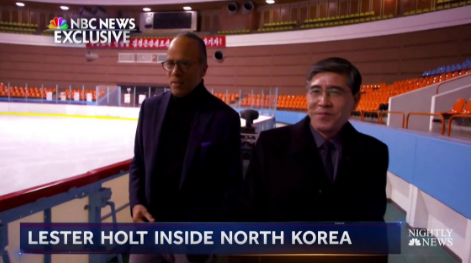 NBC News is reeling after “Nightly News” anchor Lester Holt appears to have been fooled by North Korean propagandists -- giving a cheery report from a ski resort in the Hermit Kingdom that looked to be bustling when it was widely known to actually be a ghost town.

Holt -- who returned early from North Korea after scathing reviews -- reported for “Nightly News” from the Masikryong ski resort on Monday, a facility that is the brainchild of Supreme Leader Kim Jong Un and is typically empty. The resort, built to create the appearance of a prosperous nation, was largely deserted during peak 2017 ski season, according to multiple reports.

But for Holt’s appearance, the North Korean government appears to have brought in skiers — wearing identical outfits — and staged the scene, something Holt did not appear to realize.


The resort is a “source of immense pride for a country trying to present a new and modern face to the world,” Holt said during his report.

Fox News reports NBC News did not respond to requests for comment as to whether Holt’s unexpectedly early departure from North Korea was related to the embarrassing ski resort snafu. But inside 30 Rockefeller Plaza, NBC’s more seasoned journalists were cringing.

“Who produced this garbage?” asked an NBC insider. “It is field producing 101 -- don’t do a standup somewhere that’s been staged by a dictatorial regime.”
Posted 3:08:00 AM