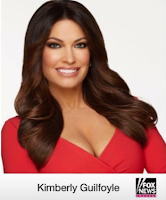 Fox News host Kimberly Guilfoyle told the San Jose Mercury News that she was in talks with the Trump administration about taking a job in the White House's press operations – potentially as press secretary.

Guilfoyle said "a number of people" have brought up the idea of her taking the job as President Trump's chief spokeswoman or another role.

"I'm a patriot, and it would be an honor to serve the country," she told the Mercury News. "I think it'd be a fascinating job, it's a challenging job, and you need someone really determined and focused, a great communicator in there with deep knowledge to be able to handle that position."

According to USAToday, the cohost of Fox's The Five was once in the running to be press secretary, and has been a strident defender of the president. Last week, after news broke that Trump had fired FBI director James Comey, Guilfoyle called it "another historic day."

"He did something here that was bold, that was decisive," she said on Fox's Lou Dobbs Tonight. "It was an excellent leadership decision."


Guilfoyle, the ex-wife of California Lt. Gov. Gavin Newsom, has been with Fox News since 2006. Prior to that, she worked on Court TV and was a legal analyst on Anderson Cooper 360. She was also a prosecutor in San Francisco and Los Angeles. She and Newsom were married for a little more than four years; during that time, Newsom was elected mayor of San Francisco.

A Fox News spokeperson noted that Guilfoyle is a "valued member" of the channel's primetime lineup and is under a long-term contract.

"As I stated in the interview, I really love what I do and my job co-hosting The Five is tough to beat," Guilfoyle said in a statement provided through a spokesperson.

Guilfoyle's interview with the Mercury News comes amid reports that President Trump is looking to shake up his communications team, including replacing current press secretary Sean Spicer. The Wall Street Journal reported last week that the president was considering "broad changes.
Posted 3:42:00 AM