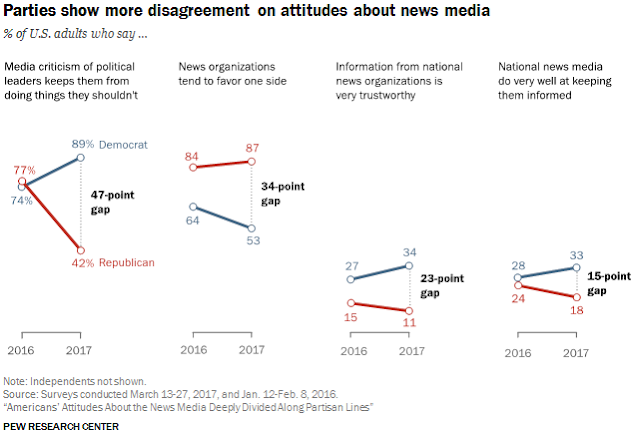 Democrats and Republicans, who already tend to place their trust in different news sources and rely on different outlets for political news, now disagree more than ever on a fundamental issue of the news media’s role in society: whether news organizations’ criticism of political leaders primarily keeps them from doing things they shouldn’t – or keeps them from doing their job.

According to the Pew Research Center, roughly nine-in-ten Democrats (89%) say news media criticism keeps leaders in line (sometimes called the news media’s “watchdog role”), while only about four-in-ten Republicans (42%) say the same. That is a 47-percentage-point gap, according to a new online survey conducted March 13-27, 2017, among 4,151 U.S. adults who are members of Pew Research Center’s nationally representative American Trends Panel. The gap stands in sharp contrast to January-February 2016, when Americans were asked the same question. Then, in the midst of the presidential primary season, nearly the same share of Democrats (74%) and Republicans (77%) supported the watchdog role.

Pew Research Center has asked this question since 1985. While Republicans have been more likely to support a watchdog role during Democratic presidencies and vice versa, the distance between the parties has never approached the 47-point gap that exists today.

The divide in news media attitudes also extends to Americans’ behaviors around news. Most prominently, Americans are also paying closer attention to national news now than in 2016, with that increase driven by Democrats. Overall, four-in-ten Americans report following national news very closely, up from a third the year before. Among Democrats, about half (49%) say they follow it closely, also up from a third in 2016.

Democrats are also driving an increase in use of mobile devices for news. Nearly half of U.S. adults (45%) often get news on a mobile device. That is 9 percentage points above just a year ago, when 36% often got news this way, with significant growth occurring among Democrats but not Republicans. What’s more, an increasing share of Americans also prefer getting news on mobile over a desktop computer. Among those who get news on both types of devices, nearly two-thirds (65%) say they prefer mobile.
Posted 4:20:00 AM