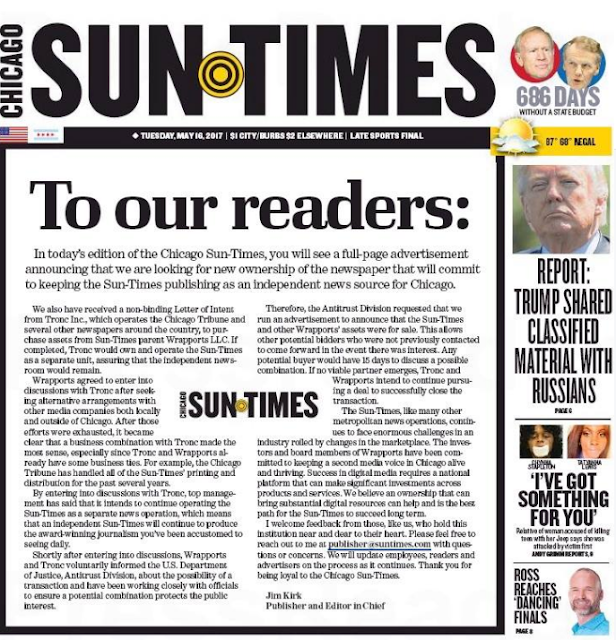 Wrapports LLC, the investment group that owns the Chicago Sun-Times, appears to be poised to sell its assets to tronc, the parent company of the Chicago Tribune and several other major newspapers, “if no viable alternative buyer comes forward,” the companies announced Monday afternoon.

If the sale goes through as indicated in a “letter of intent” between Wrapports and tronc, tronc would own and operate the Sun-Times as a separate business, preserving the newspaper’s independence, according to a statement from Wrapports.

The Sun-Times will publish a full-page advertisement in Tuesday’s paper “seeking new ownership that will commit to preserving the Sun-Times as an independent news source in the city of Chicago. That ad, a copy of which was released Monday, comes after Wrapports officials consulted with the Justice Department, which has been made aware of the possible purchase of Wrapports’ assets, including the Sun-Times and the Chicago Reader.

“The acquisition is the latest in almost a decade of transactions between the owners of the Chicago Tribune and Chicago Sun-Times,” said Tim Knight, president troncX, a division of tronc, which is short for Tribune online content.

Wrapports, which has owned the Sun-Times since 2012, agreed to enter into discussions with tronc after seeking alternative arrangements with other media companies both locally and outside of Chicago. No other bidder has emerged for Wrapports so far.
Posted 3:22:00 AM