The bona fide Rock radio legend’s final show on 97 Rock will be on December 4, 2015, after which he will retire to spend time with his wife of 36 years, as they put their combined efforts into working for their church and favorite charities.

Norton, a native of Buffalo, graduated from Amherst High School and Buffalo State College, where as a student, he worked weekends and overnights at the former WPHD-FM. In 1984, he joined Q-FM (now 97 Rock) hosting Middays. Shortly thereafter, Norton gained international notoriety for starting a non-stop 20-hour on-air marathon of music by The Police to convince the band to play a show in Buffalo. It worked, and he emceed the show. 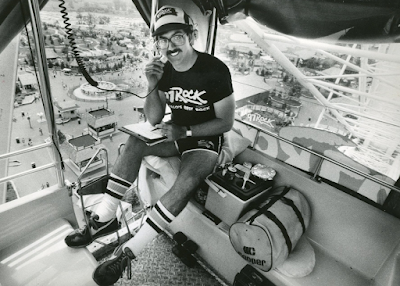 Norton also earned a place in the Guinness Book of World Records in 1985, when he spent 40 days on the new Ferris wheel at the then-Darien Lake Amusement Park (now Six Flags Darien Lake) to promote the new attraction. Not only did he spend 40 days on the ride, he broadcasted non-stop the entire time. Norton took the morning show reins at WGRF in 1982 with his tremendously popular “Norton in the Morning” show, joined by his longtime co-host Rob Lederman.

Steve Bearance, Vice President/Market Manager for Cumulus Buffalo said: “It has been a great honor and privilege to work with a true professional and iconic radio legend over the past few years and I wish Larry all the happiness that comes with retirement.  He will always be a part of 97 Rock and it is truly great to see that all of Western New York will be able to enjoy his last 80 days live on air.”

John Hager, Program Director for WGRF 97 Rock said: “Larry has been the “rock” of 97 Rock for over three decades. His name is synonymous with the station, charity and Buffalo. We thank him for his many contributions to our station and community and wish him all the best in his retirement.”

Norton said: “After 40 years on the radio in Buffalo, and living my dream to be the morning radio host for my generation, I have decided to "Turn the Page" to the next chapter of my life. 97 Rock has been, and will always be, an amazing and inseparable part of me. But now, together with my wonderful wife Barbara who has supported me for 36 years as of this month, it is time to elevate our life from our many blessed successes, to a life of more significance. As of December, we will be devoting more of our time to works of charity, for God and for our church. I can't thank the people of Buffalo enough for their support for me and the charities of Western New York that together we have helped over the last 40 years. From the entirety of my heart, thank you, Buffalo! Rock and Roll Never Forgets, and I will always love you.”

Known as Buffalo’s biggest booster and a passionate supporter of local charities including the Make-A-Wish Foundation of Western New York, Norton has helped to raise $2.8 million for Make-A-Wish Foundation through 97 Rock’s Make-A-Wish Radiothon, an annual event he has championed for the last 20 years. At 6:00 a.m. today, Norton kicked off the 21st Annual Make-A-Wish Radiothon, and will remain on-air for 28 consecutive hours while playing any song listeners want to hear with a pledge to the Make-A-Wish Foundation of Western New York. His goal this year is to surpass $3 million in funds raised through the Radiothon to help grant wishes to local children with life-threatening illnesses. As part of this year’s fundraising effort, Norton will auction off items including: Lynyrd Skynyrd and Rush autographed guitars, Paul McCartney tickets, the chance to sit in the broadcast booth with Rick Jeanneret during a Sabres game and numerous unique sports and classic rock packages.
Posted 9:05:00 AM