In 1907...announcer Jimmy Wallington was born in Rochester New York.  He became one of the most in-demand commercial spokesmen during the bigtime radio era and the early days of TV.  Among the programs he worked on were The Big Show, The Fred Allen Show a.k.a. Texaco Star Theater, The Life of Riley, Screen Director’s Playhouse, The Eddie Cantor Show, The Jimmy Durante Show and Duffy’s Tavern.  His last radio assignments were as a staff announcer at the Voice of America.


In 1908...actress Penny Singleton was born Mariana McNulty.  She made a career out of playing the comic strip character Blondie in B movies & on radio.

In 1915...actor & announcer John Conte was born in Palmer Mass. He was the radio voice of Chase & Sanborn Coffee on the Burns & Allen & Baby Snooks radio programs, on TV he appeared in such shows as The Untouchables, Perry Mason, Bonanza, Your Show of Shows and Studio One.

In 1934...the Mutual Broadcast System was formed.

The three national radio networks already in operation—the Columbia Broadcasting System and the National Broadcasting Company's NBC Red and NBC Blue—were corporate controlled: programming was produced by the network (or by advertising agencies of program sponsors that purchased airtime on the network) and distributed to affiliates, most of which were independently owned. In contrast, the Mutual Broadcasting System was run as a true cooperative venture, with programming produced by and shared between the group's members. 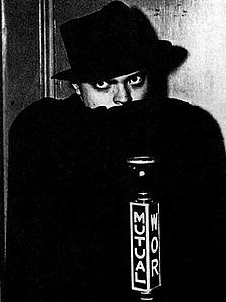 The majority of the early programming, from WOR and WGN, consisted of musical features and inexpensive dramatic serials.

WOR had The Witch's Tale, a horror anthology series whose "hunner-an'-thirteen-year-old" narrator invited listeners to "douse all [the] lights. Now draw up to the fire an' gaze into the embers ...gaaaaze into 'em deep!... an' soon ye'll be across the seas, in th' jungle land of Africa ... hear that chantin' and them savage drums?"   WGN contributed the popular comedy series Lum and Abner. Detroit's WXYZ provided The Lone Ranger, which had debuted in 1933 and was already in demand. It is often claimed that Mutual was launched primarily as a vehicle for the Western serial, but Lum and Abner was no less popular at the time.

What WLW brought was sheer power; billing itself as "The Nation's Station," in May 1934 it had begun night broadcasting at a massive 500,000 watts, ten times the clear-channel standard. 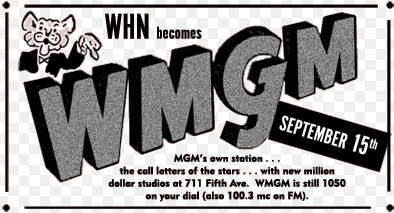 WHN became WMGM, to reflect the Loew’s then-ownership of the Metro-Goldwyn-Mayer movie studio.  The station continued its diversified format until flipping to Top 40 and rock music in the mid 1950s. While it included some R&B, country and instrumentals in the Top 40 mix, WMGM carried a narrower, more up-tempo playlist.

By the early 1960s, WMGM 1050 AM had several competitors in the Top 40 radio market.  WINS, WABC and WMCA all were playing rock, and WMGM was falling behind in the ratings.

Storer Broadcasting bought the station in 1962, renaming it WHN and dropping the Top 40 in favor of slow-paced “beautiful music” and standards.  Here’s what the switchover sounded like:


In 1959...Some in the record business were having apprehensions about the transistor radio, because teens can listen longer and almost anywhere they go - and that could hurt record sales! 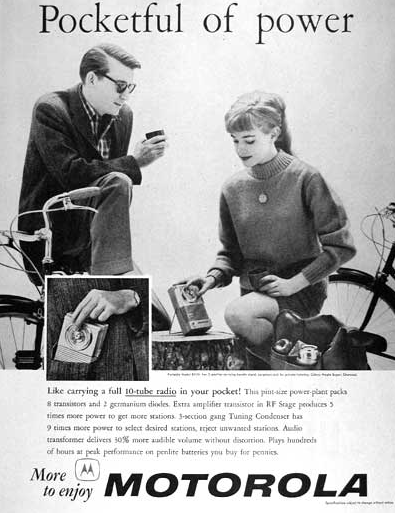 In 1959...Grahame Richards, national programming director for the Storz radio chain, offers Elvis Presley a job when he’s released from the Army in February. He did so, by writing a letter to Col. Tom Parker, Presley’s manager.


In 1959...Top 40 1010 WINS, New York will give 250 silver dollars to the listener who guesses the first time the temperature drops to freezing 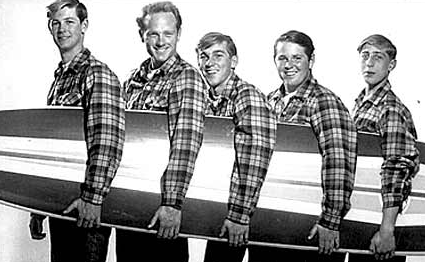 In 1961...The Pendletones, a quintet from nearby Hawthorne, CA, auditioned for Los Angeles music publishers with a version of a folk song called "Sloop John B." The suits, however, are more interested with an original song the group mentions, a novelty called "Surfin'," kicking off the career of the band that would soon come to be The Beach Boys.


In 1964... Joe O’Brien , morning man at top-rated WMCA 570 AM, New York, plays “We Have No Bananas Today” after the kidnapping of mobster Joseph “Bananas” Bonanno 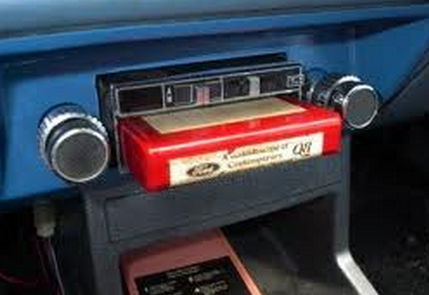 In 1965...Ford became the first American car company to offer 8-track tape players in its new models; however, the lack of home players means that car buyers must visit the Ford dealership

Several years later the New Broadcasting Company, then-owners of WLIB, was awarded a construction permit for the dormant frequency and on September 15, 1965 reactivated 107.5 as WLIB-FM. As the Federal Communications Commission recently instituted a rule prohibiting full-time AM/FM simulcasting in large markets, WLIB-FM was programmed with a jazz music format.

The stations were split up in 1972, when Inner City Broadcasting purchased WLIB-AM; WLIB-FM was then renamed WBLS. Inner City reunited the pair with its purchase of WBLS in 1974.

In 1993, Calvin O. Butts III, pastor of Abyssinian Baptist Church in Harlem, led a threat to boycott the station if they played any form of gangsta rap. Butts' protests culminated in his bulldozing a pile of hip-hop recordings during a rally. In response to the protests, WBLS excised most hip hop music from its air and carefully screened what it did play for content and language.

In 1995, after WRKS was purchased by Emmis Communications and dropped all hip-hop music in favor of a similar adult R&B format, WBLS countered with a controversial advertising campaign labeling WRKS as a "plantation station."  WBLS shortly reverted to urban contemporary, only to exit again in 2004 when WBLS switched to urban adult contemporary.

WBLS acquired WRKS's intellectual property in a merger of the two outlets announced on April 26, 2012 with a joint statement on both stations' respective websites.  In addition to acquiring WRKS's intellectual property, WBLS and WLIB also moved into Emmis's New York production facility in the West Village section of Manhattan, into studio space vacated by WRKS during the week of May 21, 2012.

On February 11, 2014, Emmis Communications announced it would purchase WBLS and WLIB from YMF Media LLC for $131 million, pending final approval from the Federal Communications Commission.  The purchase was consummated on June 10, 2014.


In 1969... Portland, Oregon finally gets another fulltime top-40 station to challenge KISN 910 AM, as KGW 630 AM switches to the format from MOR. The market also has KPAM, a daytimer.


In 1969...KMPC 710 AM, Los Angeles deejay Roger Carroll will do the announcing chores for “The Brass Are Coming” - a Herb Alpert special on NBC-TV, October 29.


In 1969...New York City will get its sixth rock station as WCBS 101.1 FM announces it will go rock October 6. Program Director Gus Gossert says the sound will be half hit singles and half album cuts. The city already had WABC, WMCA, WOR-FM, WNEW-FM, WABC- FM.

WCBS-FM was never successful with their rock format, competing with stations such as WPLJ (the other former WABC-FM) and WNEW-FM had most of the rock audience. As a result, WCBS-FM switched to oldies on July 7, 1972, becoming one of the first full-time stations in the country to use that format.  The change coincided with rival WOR-FM's decision to drop pre-1964 oldies from its playlist a few months prior (as they became WXLO). Johnny Michaels, formerly of WMCA, played the first record,   Dion's "Runaround Sue". The entire staff from the rock format remained at the station. 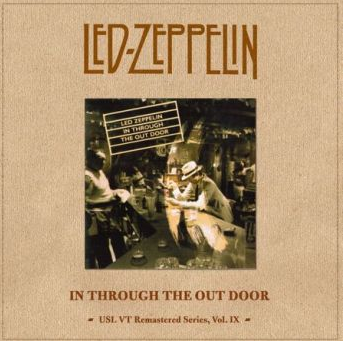 In 1979...On The Album Charts..In Through the Out Door took just two weeks to get to #1, jumping from 10 to 1 for Led Zeppelin.  One of the group's finest career albums toppled Get the Knack from the Knack.  Candy-O by the Cars came in third while Breakfast in America hadn't fallen further than #4 in its 25th week.

The rest of the Top 10:  Million Mile Reflections from Charlie Daniels Band, Chic & Risque, I Am by Earth, Wind & Fire, Midnight Magic, the breakthrough album by the Commodores, speaking of breakthroughs, Michael Jackson moved from 23-9 with Off the Wall and the hilarious Robin Williams had #10 with Reality...What a Concept. 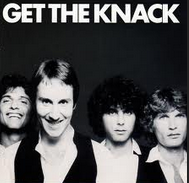 The rest of the Top 10:  Robert John and "Sad Eyes", the Little River Band with "Lonesome Loser", Dionne Warwick was up to #8 with "I'll Never Love This Way Again", Chic tumbled with "Good Times" and the Commodores reached the Top 10 for the sixth time with "Sail On".

In 1989...Bright A/C KKBT 92.3 FM  debuts in Los Angeles. It had been classical KFAC-FM for many years. Comedian Paul Rodriquez and Ron O’Brien are part of its airstaff.