Jacobs Research: Why We Listen To Public Radio 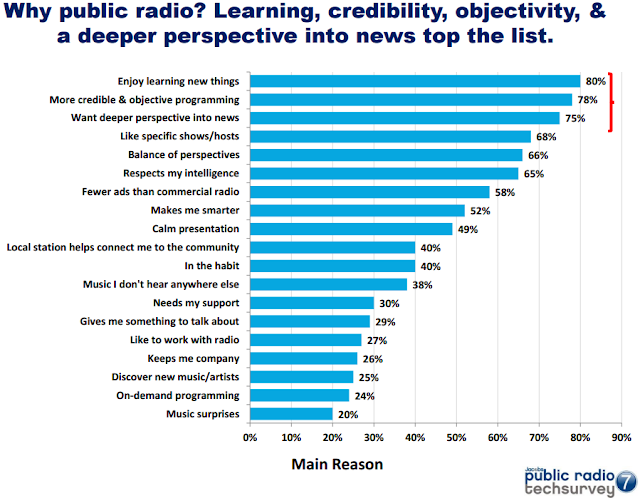 After seven years of technology surveys for the public radio system, Jacobs Media’s newly released PRTS7, in partnership with the Public Radio Program Directors Association (PRPD), tells an incredible story about the ongoing digital revolution and how public radio is positioned.

Jody Evans, President of PRPD comments, "The relationship between Jacobs Media and PRPD is one of public radio's most vital partnerships. As PRPD has honed its strategic focus around Consumption, Relevance and Sustainability, it's clear that our years of work with Jacobs Media was laying that ground work."

And Jacobs Media President Fred Jacobs notes, “The public radio audience is on the move, increasing its use of digital media. Fortunately, the system is answering changing audience needs with podcasts like ‘Serial’ as well as mobile applications like the NPR One app.”

Fred Jacobs will participate in a special session at the Public Radio Program Directors Convention in Pittsburgh on Tuesday, September 29 – “The State of the Public Radio Audience” with the RRC's Dave Sullivan and Edison Research's Larry Rosin.  Later that afternoon, Fred will moderate a live focus group of public radio listeners later that day covering topics that include membership and pledge.