"This radio station … is the oldest FM in the state of North Carolina ... and it is always been in this building," Hood said. 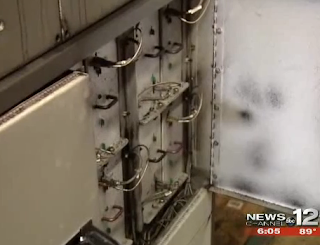 Late Friday night, a fire started in the equipment room of the Beasley-owned station.

The fire knocked two radio stations off the air. it began in the transimitter room of WNCT 1070 AM. According to Hood, the engineer was alerted by a silence alarm on 107.9 FM, whose studio is in the same building.

Hood says the fire was extinguished when it melted a plastic waterline in the ceiling. Nobody was in the building at the time.

Smoke and water damage effected both station operations. Both AM transmitters were damaged while support gear from the FM is causing intermittent problems for the FM.

"We're currently gutting the whole building; carpet, painting, all the insulation, all the ceiling tiles, everything is coming out," Hood said.

The damage is estimated to cost half a million dollars.

Despite their devastation, both financially and in morale, they’ve stayed on the air.

"There’s soot in the building. We have asked all of our employees please stay home, except for on-air staff," Hood said.

"Being a community station, and with what has happened, we have to keep the business going," Diamond said.