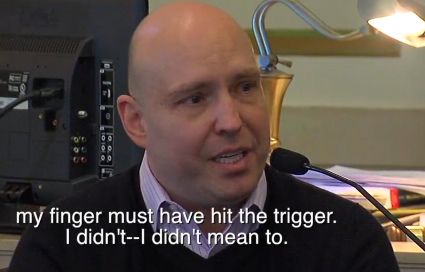 Blake Seylhouwer said, stumbling through his words and holding back tears. “My finger must have hit the trigger. I didn't – I didn't mean to."

According to WCPO-TV9, the father, businessman and former WKRC 550 AM brokered host took the stand Thursday and testified in his own defense. It was the first time he had spoken publicly since prosecutors said he purposely fired a rifle at his wife last summer.

"Was your intention at that time to shoot Misty?" defense attorney Patrick Mulligan asked Seylhouwer.

Since his trial began Monday, Seylhouwer has been called a liar, a cheater and a manipulative man.

Prosecutor Jeff Heile told jurors there is no question Seylhouwer fired on his wife Misty Seylhouwer on purpose after an argument outside their Madeira home on Aug. 12.

Police said a bullet from the high-powered hunting rifle hit the couple’s concrete driveway and sprayed shrapnel and bits of concrete into Misty’s head, leg, stomach and neck. Their two daughters, ages 1 and 4, were inside the house at the time.
Posted 3:45:00 AM