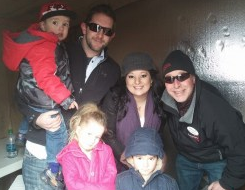 A two-year old awaiting heart surgery has inspired the sixth annual "Freezin' for a Reason."

Billings morning personality Livin' Large Larry was not planing this year's event until he heard about Malachi Hosa.

Malichi turns three on Friday and already has had two open heart surgeries.

He's camping out for three nights in the Stockman Bank parking lot on King Avenue West.

Larry says he knows what it's like to receive help in overcoming a medical issue.

"Out of six years of doing this, this is the first time I've talked about this part," Larry said. "I had cancer 18 years ago and my kids were three years old and six months old at that time, and I vowed that when I beat my disease, I would come back and be that radio guy that just gives back, gives back. My wife will tell you a longer version of that story, but in a nutshell, that's why I do Freezin' for a Reason, to be quite honest with you."

He started this year's fundraiser at 5pm Wednesday - and he'll stay out until 5pm Friday.
Posted 3:01:00 AM