Report Looks At The Future of Digital Radio Marketing 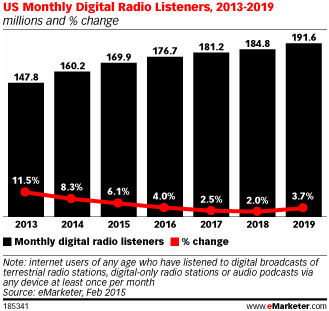 Digital radio has evolved into a viable, robust digital channel that complements social media, video sites and other mainstream venues, according to eMarketer.com.

Audio streaming services are aggressively growing their user bases, advertising revenues and integration with technology platforms ranging from game consoles and connected TVs to automobiles and wearables. Virtually any device that can deliver music is fair game for streaming apps, and for many users, these apps are the main conduit to their listening experiences, according to a new eMarketer report, “Digital Radio: Led by Pandora, Now Robust ‘Audio’ Ad Channel.”

Companies that advertise on digital radio don’t necessarily care about distinctions between playlist-type experiences (the Pandora model) and on-demand streaming (the Spotify model). Some marketers don’t even distinguish between streaming services and terrestrial or satellite radio. Advertisers are after an audience, and they see digital radio as a platform that reaches an engaged user who can be precisely targeted by geography, demographics, social connections, listening behavior and other critical metrics.

According to eMarketer, as digital radio continues to mature, advertisers are increasingly looking at the entire radio universe as a single budget item rather than segmenting it by platforms such as traditional, digital and satellite.

“We are looking at all radio-type advertising as audio,” said Ed Gold, advertising director at State Farm. “When I look at my overall budget—that which used to be called the radio budget but is now called the audio budget—we are going where the consumer is, so if more consumers are going to digital radio, we are following them.”

As the industry’s biggest and best-known player, Pandora has tended to be the default choice for advertisers looking to tap the digital radio audience. However, more and more marketers are looking beyond Pandora to iHeartRadio, Spotify and others. Since each service has a unique approach and several have built sizable audiences, it makes sense for marketers to closely examine the landscape before making choices. In many cases, it might make sense to use multiple digital radio services and to coordinate the ad buy with terrestrial and satellite channels.