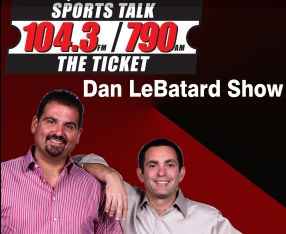 Fusion and ESPN Radio have announced an agreement in principle for Fusion to present a live simulcast of ESPN Radio’s The Dan Le Batard Show beginning this spring. The three-hour broadcast will bolster Fusion's live programming on weekday afternoons from 4 - 7 p.m. ET.

"Dan and Stugotz are an extremely engaging pair, and we are thrilled that they are bringing their unique flare to Fusion’s daily line-up," said Wade Beckett, Fusion's Chief Programming Officer. “Dan’s smart-yet-irreverent take on sports and the stories making headlines perfectly aligns with Fusion's desire to present this young, diverse generation with an array of dynamic voices that have an authentic point of view and, at the end of the day, are just are fun to watch.”

"We are pumped about unleashing the primitive Stugotz on a new and unsuspecting audience,” said Le Batard. “And maybe we will talk some sports, too. Our goal is to not totally break Fusion. But the show will be better on the days we do."

Le Batard joined the ESPN family in 1998 as a contributor to ESPN The Magazine. He also served as a reporter for ESPN’s College GameDay, Sunday Night Conversation and Outside the Lines series. In 2013, Le Batard brought his Miami radio show, heard on WAXY 104.3 FM /The Ticket since 2004, to ESPN Radio’s national audience. The Dan Le Batard Show has continued with one local hour before a three-hour weekday broadcast at 4 p.m. on ESPN Radio, espnradio.com, the ESPN Radio app and SiriusXM Channel 83.
Posted 3:29:00 AM