COVID-19 Has Newspapers On Life Support

Even before COVID-19, America’s newspaper industry was on life support.

More than 1,800 newspapers have folded since the internet became a prime source for news. In 2000, at least 55 million American homes subscribed to a daily paper, about double what it is today, writes writes Meg James at The L-A Times citing data from the Pew Research Center.

During the last two decades, newspaper chains, including McClatchy, which owns the Sacramento Bee and Miami Herald, and the former Tribune Co., owner of the Chicago Tribune, have tumbled into bankruptcy. Leveraged buyouts and consolidations have left companies mired in debt. The nation’s largest chain, Gannett Co., which owns USA Today and 250 daily newspapers, including the Arizona Republic in Phoenix and the Desert Sun in Palm Springs, merged with another large company in November. It now reaches 1 in 4 daily newspaper subscribers, but its stock has dropped 85% this year. 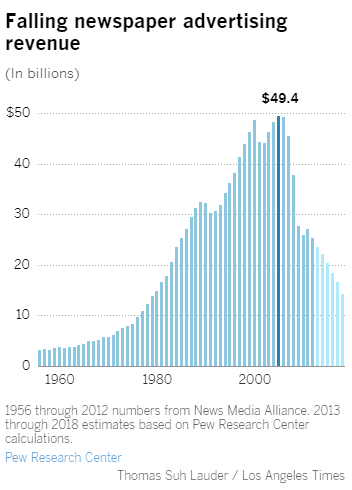 Newsrooms have been hollowed, print pages slashed. The Pittsburgh Post-Gazette, for example, prints just three days a week. Billionaire Warren Buffett, who had owned the Buffalo News since 1977 and was hailed as a savior of local journalism, in January unloaded his chain, which includes the Omaha World-Herald, to Lee Enterprises, which owns the St. Louis Post-Dispatch. Buffett previously conceded that newspapers were “toast.”

Since the Great Recession, nearly half of U.S. newspaper journalism jobs have disappeared, leaving fewer than 38,000 reporters, photographers and editors.

In response to the pandemic, local governments and institutions — health departments, hospitals, schools and businesses — are making vital decisions that affect lives and livelihoods, highlighting how useful local newspapers can be.

The print industry’s demise has larger implications, Doctor and others say. Without reporters keeping tabs on city halls, state agencies and community organizations, there would be little accountability. Researchers have found that newspapers remain the nation’s most comprehensive, fact-based source of information.

Small dailies and alternative weeklies are among the most threatened. They rely on local businesses for advertising, rather than big-dollar national advertisers.

The Los Angeles Times, which was thrown a lifeline in 2018 when biomedical billionaire Dr. Patrick Soon-Shiong purchased the paper along with the San Diego Union-Tribune, also is feeling financial pain. The paper has spent 18 months rebuilding its newsroom and expanding its online offering only to be walloped by the virus.

“Advertising revenue has nearly been eliminated,” California Times President Chris Argentieri wrote in a memo to the newspaper’s staff this week, outlining initial cost-cutting measures, including furloughs and trimming salaries of high-level managers during the crisis, including the eight top editors. 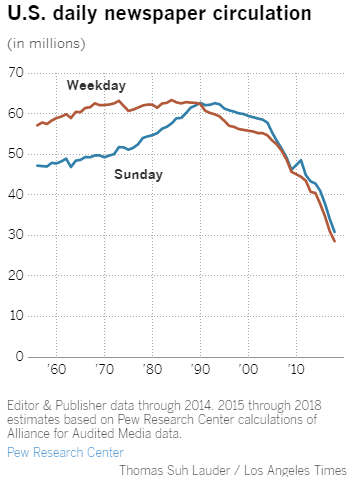 On Thursday, the company folded three of its community newspapers — the Burbank Leader, the Glendale News-Press and the La Cañada Valley Sun — because they were losing money. The Glendale paper was a pioneer, publishing since 1905. The Valley Sun popped up in 1946 as the postwar building and population boom began to reshape California.

The widespread financial woes come even as traffic to newspaper websites has doubled, Doctor said, and subscriptions to digital sites have dramatically increased as readers rally to support trusted news outlets.

“This [coronavirus] story has been transformational: It has shown the absolute uniqueness and value of local news,” Doctor said.

“Local news plays an indispensable role in American civic life as a trusted source for critical information,” the senators wrote. Since the pandemic was declared, they said, local news outlets have been “providing communities answers to critical questions, including information on where to get locally tested, hospital capacity, road closures, essential business hours of operation, and shelter-in-place orders.”