Telecom giant Verizon on Friday reported that it lost 84,000 net pay TV subscribers for its FiOS consumer video service in the first quarter, compared with a loss of 55,000 in the year-ago period and a loss of 51,000 in the fourth quarter.

According to The Hollywood Reporter,  the company cited "the ongoing shift from traditional linear video to over-the-top offerings," saying it ended March with 4.07 million consumer video connections. 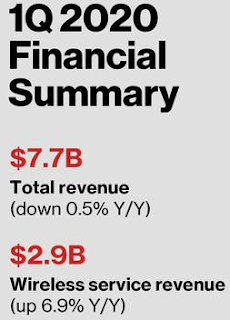 This earnings season is covering results for companies' first quarter of 2020, which include about a month worth of coronavirus pandemic fallout. Wall Street will listen closely for what management teams say about the financial and operational impact beyond the first quarter though.

Verizon, led by CEO Hans Vestberg, did not say on Friday how many of its users have taken advantage of the telecom giant's deal with Walt Disney's Disney+ streaming service.

Management had previously said that the deal has exceeded the firm's expectations. Disney said in early February that it had hit 28.6 million subscribers.

The companies' agreement gives some of the phone giant's wireless and internet customers a year of Disney+ for free. The offer applies to Verizon's wireless unlimited customers and new Fios internet and 5G home internet customers. Approximately 17 million Verizon wireless accounts are unlimited, and "a pretty significant number" of those are expected to take advantage of the Disney+ offer, Verizon previously said.