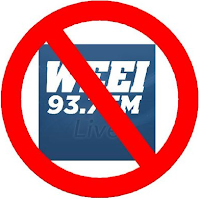 “It’s a matter of the corporate world of broadcast media colliding with the politically incorrect culture of sports talk radio,” Michael Harrison, publisher of Talkers Magazine told The Boston Herald. “I salute Entercom for the effort. However, sensitivity training for sports talk hosts is like teaching NFL players how to tackle gently.”

WEEI plans to suspend live programming from 6 a.m. to 6 p.m. tomorrow so all employees can take part in the training.

Bruce Mittman, president and CEO of Mittcom, an advertising agency in Boston, said Entercom “is probably trying to shore up losses in revenue and make a statement to the community” that boorish behavior won’t be tolerated.

The radio silence is the culmination of a horrendous stretch of bad PR for the embattled sports powerhouse.

Last week, midday host Christian Fauria was suspended for five days for mocking Brady’s agent, Don Yee, using a fake Asian accent. The racist banter came during a bit about Herald writer Ron Borges, who wrote a column based on bogus information he was given as a prank by a WEEI listener.
Posted 4:20:00 AM