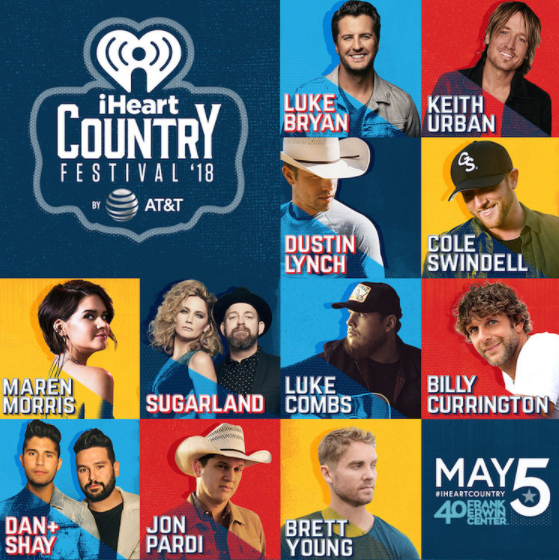 iHeartMedia announced today the return of the iHeartCountry Festival by AT&T on Saturday, May 5. For the fifth straight year, Country music's biggest superstars will perform at the Frank Erwin Center in Austin, Texas in a live celebration of all things Country.

The Country music of the iHeartRadio app will come to life with an extraordinary lineup including Luke Bryan, Keith Urban, Dustin Lynch, Cole Swindell, Maren Morris, Sugarland, Luke Combs, Billy Currington, Dan + Shay, Jon Pardi and Brett Young, with more to be announced. In addition, one of iHeartMedia's nationally-syndicated top on air personalities, Bobby Bones, will return as the official host of the iHeartCountry Festival main stage.

“What makes this Festival special is that it is the one night the A-list of Country Music comes together to perform live, collaborate with friends and spend time together as a family,” said John Sykes, President of  Entertainment Enterprises for iHeartMedia. “Everyone stays to support each other until the last band has walked off stage.”

Tickets will be available to eligible AT&T customers through an exclusive AT&T THANKS Priority Pre-sale beginning February 27 at 10 a.m. CT through March 1 at 9:59 a.m. CT via the AT&T THANKS app. Tickets go on sale to the general public on Friday, March 2 at 12 p.m. CT via TexasBoxOffice.com.
Posted 9:37:00 AM