NBC’s coverage of the Opening Ceremony for the PyeongChang Olympics posted a Total Audience Delivery average of 28.3 million viewers to rank as the most-watched Friday night program on any network since the 2014 Sochi Olympics, according to live plus same day fast national data released today by Nielsen, and digital data from Adobe Analytics.

NBC’s 14.7/27 primetime household rating for the Opening Ceremony outperformed by 167% the combined rating of ABC, CBS and FOX for the night (5.5), to rank as the most-dominant Friday in People Meter History (Sept.-May TV season, since Sept. 1987).

Mark Lazarus, Chairman of NBC Broadcasting & Sports said,  “The Opening Ceremony was a terrific show, which we hope will only be topped by the excitement generated by the athletes and competition over the next few weeks. American audiences continue to be interested and excited for the Games, and the early consumption results show that our multiple platform strategy is dominating the media landscape.”

Opening Ceremony viewership on NBC peaked at 31.5 million from 9-9:15 p.m. ET, as Team USA entered during the Parade of Nations. 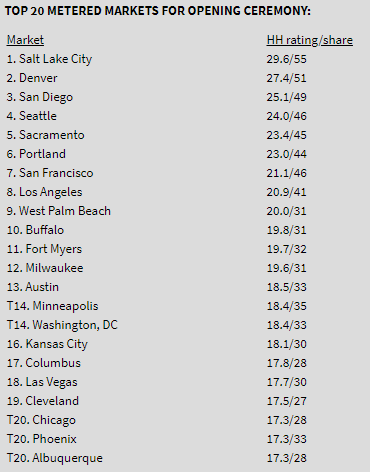 Friday night’s “The Tonight Show Starring Jimmy Fallon” delivered an 18% increase in total viewers versus the night of the Rio Opening Ceremony – averaging 4.662 million persons versus 3.943 million on Friday, Aug. 5, 2016, during the Rio Games.
Posted 3:21:00 AM