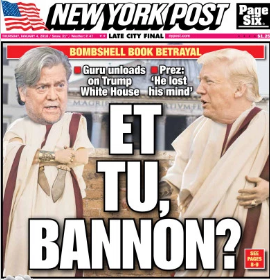 President Donald Trump launched a scathing attack on former top adviser Steve Bannon on Wednesday, responding to a new book that portrays Trump as an undisciplined man-child who didn’t actually want to win the White House and quotes Bannon as calling his son’s contact with a Russian lawyer “treasonous.”

Hitting back via a formal White House statement rather than a more-typical Twitter volley, Trump insisted Bannon had little to do with his victorious campaign and “has nothing to do with me or my Presidency.”

“When he was fired, he not only lost his job, he lost his mind,” Trump said.

The Associated Press reports it was a blistering attack against the man who helped deliver the presidency to Trump. It was spurred by an unflattering new book by writer Michael Wolff that paints Trump as a leader who doesn’t understand the weight of the presidency and spends his evenings eating cheeseburgers in bed, watching television and talking on the phone to old friends. 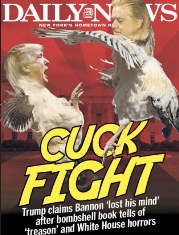 Harder sent a letter to Bannon saying the former Trump aide violated confidentiality agreements by speaking with Wolff. The letter demanded Bannon “cease and desist” any further disclosure of confidential information. Bannon did not immediately respond to a request for comment.

White House aides were blindsided when early excerpts from “Fire and Fury: Inside the Trump White House” were published online by New York magazine and other media outlets ahead of the Jan. 9 publication date.

The release left Trump “furious” and “disgusted,” said White House Press Secretary Sarah Huckabee Sanders, who complained that the book contained “outrageous” and “completely false claims against the president, his administration and his family.”
Posted 3:13:00 AM