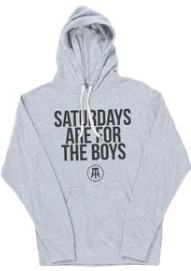 It's been a difficult season for the NFL, with lower ratings, sagging attendance and players' ongoing national anthem protests. Now, the league appears to have another problem on its hands, reports Fox News.

The website Barstool Sports has threatened to file a lawsuit claiming the NFL stole its “Saturdays Are For The Boys” trademark.

On "Tucker Carlson Tonight," website founder Dave Portnoy argued Friday evening that the NFL committed a copyright violation by putting shirts on sale featuring team logos and the words  “Sundays Are For The [Team Name]."

"The NFL has no problem suing everybody when they think they've even sneezed at what they're doing. So, we decided we'd fight back on this one," Portnoy said.

Host Tucker Carlson asked why the NFL didn't just pay Barstool Sports for the right to use the trademark.


Carlson asked if the NFL gave them a heads-up that they would be appropriating the slogan.

"They did not. I think that would ruin the steal," Portnoy said. "No, we just saw them. We were surprised by them. And then we sent the cease-and-desist out."
Posted 5:59:00 AM