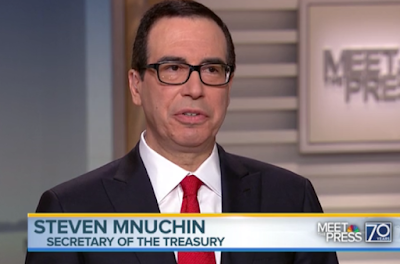 During a series of interviews on the Sunday political talk shows, US Treasury Secretary Steve Mnuchin and Office of Management and Budget director Mick Mulvaney attempted to qualify Trump's attacks on Saturday of Carmen Yulin Cruz, reports BusinessInsider.

In the wake of Hurricane Maria, which left millions of residents without water and electricity, she has begged the administration for help, and received Trump's ire in several tweets over the weekend.

On "Meet The Press," Mnuchin dodged host Chuck Todd's repeated question about whether Trump regretted criticizing the mayor, and why Trump said Puerto Ricans "want everything to be done for them when it should be a community effort."

"Why did he attack the mayor?" Todd asked. "She's in a situation, a pretty desperate situation. He seemed to lack a little bit of empathy for the situation at the time."

"When the president gets attacked, he attacks back," Mnuchin said. "And I think the mayor's comments were unfair, given what the federal government has done."


In an interview on CNN, Mulvaney also refused to directly answer host Jake Tapper's question about who Trump was referring to when he said "they" wanted everything done for them.

But the director also criticized the San Juan mayor, saying it was "unfortunate" Cruz wanted to "go against the grain."

"My understanding is that as of yesterday, she had not even been to the FEMA operation center in her own city," Mulvaney said.

Cruz has emerged as one of the loudest local voices calling for help in the wake of the storm, saying the administration risked "genocide" if it did not deliver vital resources to the island, which is still without power, food, or water in many areas.

Trump is scheduled to visit Puerto Rico on Tuesday. Cruz said she would meet with him if he asks her for a meeting.

Yulin Cruz is a member of Puerto Rico’s Popular Democratic Party that wants the island to remain a U.S. territory. But she sounded more like a member of the island’s Independence Party in a video that surfaced back in January when President Barack Obama commuted the sentence of Rivera Lopez.

The mayor is shown praising the convicted Puerto Rican terrorist.

Lopez Rivera was sentenced to 35 years in prison for his involvement in the FALN, a Puerto Rican separatist group that was responsible for more than 100 bombings in the U.S. during the 1970s and 1980s.

Four people lost their lives in 1975 when an explosion happened at Fraunces Tavern in New York City, an attack the FALN was responsible for. The organization was also responsible for seriously injuring three NYPD officers in several bomb attacks on New Year’s Eve in 1982.

Also,  The mayor of Guaynabo, Puerto Rico cast serious doubt Saturday on the claims made by San Juan Mayor Carmen Yulin Cruz, who has repeatedly attacked President Trump and accused him of abandoning Puerto Rico in the aftermath of Hurricane Maria.

Guaynabo’s mayor, Angel Perez, said in an interview with The Daily Caller that his experience with the federal government has been different from Cruz’s, in part because — unlike Cruz — he has been participating in meetings with officials from the Federal Emergency Management Agency (FEMA) and other federal agencies.

Puerto Rico’s governor says efforts to restore cell service, gas and other basic needs to the island’s rural residents are progressing, even as many in those towns report feeling forgotten.

“I recognize that right now, whether it’s the gas line or the ATM line, we’re limited,” Governor Ricardo Rossello told Reuters in an interview on Saturday at the Puerto Rico Convention Center, the government’s temporary headquarters.

“But if you see the numbers,” he said, “you see there is a steady path to improvement.”

More than half of Puerto Rico’s 3.4 million people lack access to drinking water 11 days after Hurricane Maria hit the U.S. territory, and 95 percent remain without power, according to the U.S. Defense Department. Some are expected to be without power for months.

But on Saturday, Federal Emergency Management Administration (FEMA) officials reported that a third of the island’s telecommunications network had been restored, and some 765 gas stations - well over half - had fuel, though it was not clear how much.
Posted 3:50:00 AM