In a new blog posting, Matt Bailey of Intergr8 Research writes that as clock radios, stereos, and Walkmans disappear, The Amazon Echo and Google Home have given new hope to programmers for bringing local radio back into listeners’ homes.

While screen-driven smartphones and tablets have proven well-suited to the endless exploration Spotify and YouTube enable, smart speakers seem perfectly suited to radio:   A. Because they’re powered by voice-commands, listeners have to know what they want to hear and how to ask for it. In theory, that gives strong local radio brands a head start. And B. Since they’re designed to play in the background while users do other things, smart speakers also seemingly pair perfectly with radio’s hands-off, hassle free approach to providing listeners a music soundtrack.

Bailey writes about these new technologies and how listening options might be changing listeners’ relationships with their local radio stations.

To explore this topic, Integr8 conducted 3,140 online interviews with 15- to 39-year-olds who are partisans to a local CHR, Rhythmic CHR, Urban, Alternative, or Country station. Bailey admits that while it’s not a representative sample of all Americans, it is a solid snapshot of the radio listeners most relevant to new music radio stations. Participants were asked them about what devices they own, what services they use to hear music, and where they hear new music first. 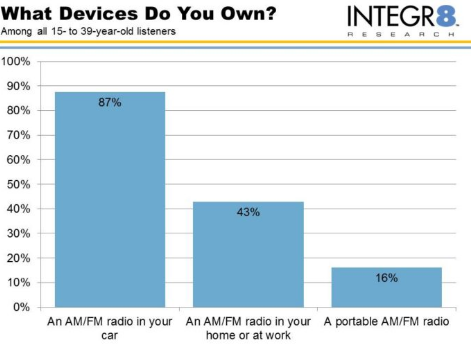 The good news is that listening to a local FM station on a traditional radio remains the most common way listeners consume music, whether they still have a radio at home or not. YouTube, Spotify, and Pandora remain competitive but subordinate choices among these listeners. 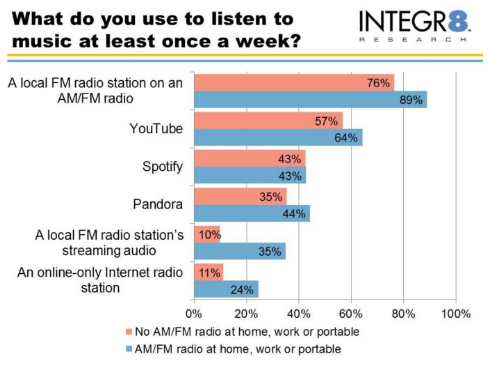 When radios aren’t present in people’s homes and workplaces, people are less engaged with radio-style programming on all platforms. Spotify is the only listening option that is as popular among people who don’t own radios outside of their car as it is among people who do.

There is only one smart device that listeners from their teens to their 30s are all highly likely to own—a smartphone.  For radio programmers seeking to reach listeners on the hardware they are most likely to own, however, the smartphone remains the one device most people have and have with them most of the time. 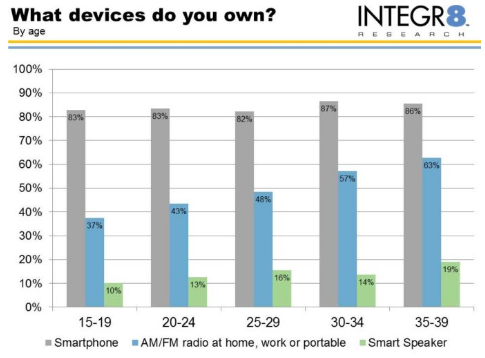 Bailey's Takeaways:  Smart speakers are still mostly owned by early adapters, but that’s changing quickly. Integr8 is predicting 75% of American households will have one by 2020.
Posted 11:05:00 AM