“Our first-quarter results once again demonstrate the strength of our strategy, which is to diversify our revenue mix as we achieve our long-term financial goals,” said Leslie Moonves, Chairman and Chief Executive Officer, CBS Corporation.

“Retransmission consent and reverse compensation led the way in Q1, growing 28%. This contributed to a 17% increase in our Company’s affiliate and subscription fee revenue, which also benefited from our over-the-top subscription services, CBS All Access and Showtime OTT. In addition, we a had very solid quarter for content licensing and distribution, which was up 16% and is poised for continued strength when several of our hit series enter the syndication cycle later this year. And we continue to add to our content pipeline all the time. In two weeks we will unveil our new primetime schedule on the CBS Television Network, which will include 19 returning series further strengthened by several new shows, the majority of which we will own.

"We look forward to the upfront marketplace where we’re confident advertisers will once again place great value on the #1 television network in an increasingly fragmented media landscape. And longer term, that content becomes even more valuable when we license it across distribution services, both here in the U.S. and internationally as well. As we continue to sharpen our core content focus in the quarters to come, including the impending split-off of our radio business, we will be even better positioned to take advantage of all of the opportunities before us. So there is so much yet to come, and our road map for success is clear.” 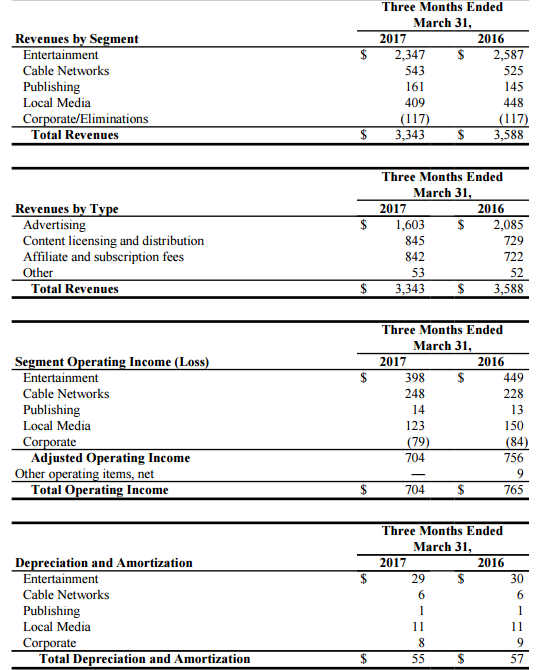 1Q 2017 included a noncash charge of $715 million in discontinued operations to establish a valuation allowance to adjust the carrying value of CBS Radio to the value indicated by the stock valuation of Entercom Communications Corp. CBS Radio is classified as held for sale and therefore, in accordance with accounting guidance, the valuation allowance will continue to be adjusted based on the trading price of Entercom’s stock, which could result in future gains or losses.


On Thursday's earning call with anaylysts, COO Joseph Ianniello give a quick update on the CBS Radio/Entercom transaction. "Our deal to merge CBS Radio with Entercom remains on track for the second half of 2017. We filed a CBS Radio S-4 a few weeks ago, and we're in the process of obtaining the necessary approvals from the various regulatory agencies. We look forward to recognizing the value of this business in the months ahead.

"Also in connection with our Radio transaction and in accordance with accounting rules, we made a non-cash adjustment to the carrying value of Radio to the current market derived by Entercom's stock price. As an asset held for sale, the value of our Radio assets will be marked to market until we complete this divestiture, and could be adjusted downward or upward from current levels."
Posted 4:36:00 AM