With the nation’s focus on the start of the NFL season and the stretch run of the Presidential campaign, ESPN Audio’s originally produced podcast business is enjoying unprecedented success, with “Fantasy Focus Football” and two FiveThirtyEight offerings leading the list in August when overall downloads set an ESPN record for the sixth consecutive month.

“FiveThirtyEight Elections” – where FiveThirtyEight’s editor-in-chief Nate Silver hosts and discusses the presidential election with the site’s political team – was atop the list of more than 40 offerings with 7.8 million downloads in August.  The daily “Fantasy Focus Football,” hosted by Matthew Berry with Field Yates and injury expert Stephania Bell, was second with 6.1 million, up 56% from the year before (3.9 million).  FiveThirtyEight’s  “What’s the Point” – highlighting data’s growing influence in people’s lives where host Jody Avirgan talks to guests who are using data in surprising ways – came in third with 1.6 million. 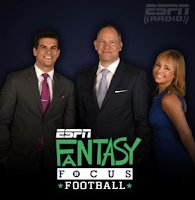 In fact, as of September 20, “Fantasy Focus” had already topped its August total – and, more importantly, its September 2015 total of 6.7 – with 6.8 million downloads this month.

Overall, including podcasts of ESPN Radio and television programming, ESPN Audio broke its record for podcast impressions for the sixth consecutive month with 54.6 million, up 94% from 28.1 million in August 2015.  It also marked a 12% rise from the previous record of 48.8 million in July.

One of the highlights in August was “Pin Kings,” part of an unprecedented multiplatform enterprise journalism initiative involving television, ESPN the Magazine and ESPN.com.  The series was a first for ESPN Audio – an episodic presentation, 16 chapters, as it were, complete with a mystery building to a dramatic ending.