HRC Strategy: Get Under Trump's Skin 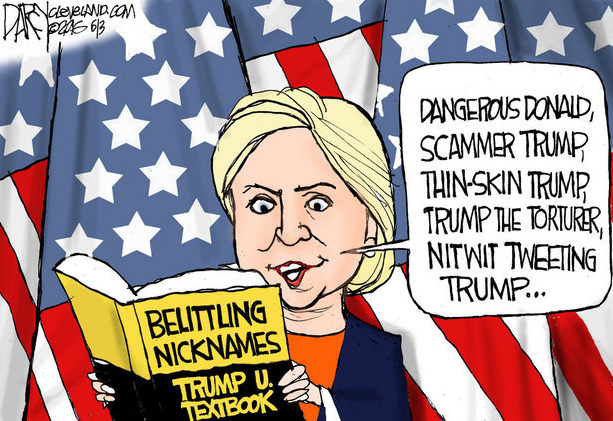 Hillary Clinton’s campaign is doing everything it can to get under Donald Trump’s skin, according to The Hill.

The Democratic presidential nominee tore into Trump in a series of tweets on Friday that ripped the Republican nominee for saying that people should check out a former Miss Universe’s sex tape.

“What kind of man stays up all night to smear a woman with lies and conspiracy theories?,” Clinton tweeted, targeting Trump’s temperament and personality.


"Who gets up at 3 o'clock in the morning to engage in a Twitter attack against a former Miss Universe?” —Hillary
— Hillary Clinton (@HillaryClinton) September 30, 2016


Around the same time on Friday, Clinton campaign chairman John Podesta poked fun of the 70-year-old Trump’s age while questioning both his maturity and self-control.


I'm almost @realDonaldTrump's age, so get the urge to get up in the middle of the night, but impt safety tip: don't reach for your phone.
— John Podesta (@johnpodesta) September 30, 2016


While the goading by Clinton and Podesta were a direct counterattack on Trump’s tweets about Alicia Machado, the former Miss Universe, they were reflective of a trend by Team Clinton.

On Wednesday, Sen. Claire McCaskill (D-Mo.) needled Trump by calling for a “weigh in” of the Republican nominee, saying Democratic women senators are “concerned about Trump’s weight.

Trump’s feud with Machado originated when he criticized the beauty queen’s weight gain. McCaskill’s tweet came as surrogates were being asked by the campaign to keep the pressure on Trump.

Howard Dean, the former Vermont governor and Democratic National Committee chairman, needled Trump on Twitter and cable television this week over his sniffling during the first presidential debate on Monday.

Dean also came under criticism for the attacks, which suggested Trump’s sniffles might have been linked to cocaine use.  Dean apologized on MSNBC for the insinuation on Friday, but also kept up the personal attacks, suggesting there was something wrong with Trump.


What kind of man stays up all night tweeting period. Certainly not a potential President. https://t.co/AQzOMffn1k
— Howard Dean (@GovHowardDean) September 30, 2016

Democratic strategist Jamal Simmons said Clinton is employing a fairly basic strategy that he described as “trying to poke the bear.”