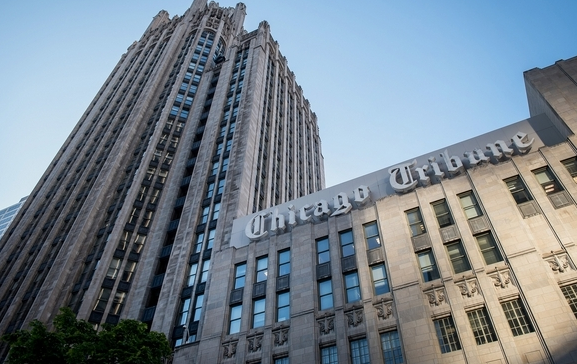 The owner of Chicago's Block 37 mall is close to a deal to buy the landmark Tribune Tower, where it is expected to launch a major redevelopment that could include a hotel, apartments, condominiums and new retail along Michigan Avenue.

According to Crain's Chicago, CIM Group is close to a deal to buy the 36-story tower on Michigan Avenue for about $240 million to $250 million, according to someone familiar with the deal. Los Angeles-based CIM does not have the building under contract but is expected to soon, according to the person.

CIM's partner in the deal is Chicago-based development firm Golub.

The sale process has been ongoing since October, when Tribune Media announced it had hired New York-based Eastdil Secured to seek a sale of the tower at 435 N. Michigan Ave. Stephen Livaditis, a Chicago-based senior managing director at Eastdil, is leading the sale process for Tribune Media, the broadcast company that owns WGN-TV and WGN Radio.

The slow-moving deal has been complicated because potential buyers have been considering a variety of redevelopment options, which could include converting the existing office tower to a hotel. They also have been trying to gauge how large a new building the city is likely to allow to be constructed on a parking lot east of the Gothic tower, which affects the value of the overall site.

The office tenants in the building, Tribune Media and Tribune Publishing—recently renamed Tronc—have been evaluating potential new office spaces downtown in anticipation that a new owner may eventually want to clear out the offices for a new use, according to real estate sources.
Posted 5:35:00 AM