Measuring brands’ health over time, the EquiTrend Brand Equity Index is comprised of three factors - Familiarity, Quality and Purchase Consideration - that result in a brand equity rating for each brand. Brands ranking highest in equity receive the Harris Poll EquiTrend “Brand of the Year” award for their respective categories. This year, more than 97,000 U.S. consumers assessed more than 3,800 brands (including more than 200 media brands), across nearly 500 categories. The complete list of Harris Poll EquiTrend Brands of the Year can be found at: http://www.theharrispoll.com/equitrend-rankings/2016. Additional information can be found at: www.theharrispoll.com/equitrend-information.

“Brand equity in media appears to operate somewhat differently than it does in other categories, reflecting the changing relationships between mass, targeted and even personalized channels,” said Joan Sinopoli, vice president of brand solutions at Nielsen, which owns the Harris Poll. “Some of the highest equity media brands may have limited penetration among the media-consuming public, but those that consume them, love them. They are true ‘fan brands’.” 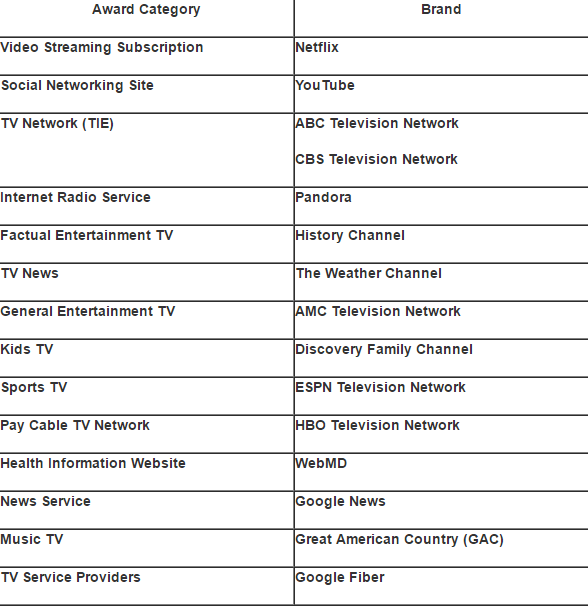 Netflix is Harris Poll’s 2016 Video Streaming Subscription Brand of the Year and holds the strongest brand equity among media companies. In addition, Netflix has the 34th highest brand equity among all brands assessed. Netflix’s brand equity score has risen 18 percent since 2013, placing it among the study’s top “rapid equity risers.” When reviewing media brands “on their way up,” consumers rated Netflix number three behind Google Fiber and Amazon Prime Instant Video.

Netflix holds a substantial lead over its nearest video streaming subscription competitor - Amazon Prime Instant Video - in both equity and connection (the emotional and rational bonds consumers forge with brands.) However, it scores immediately behind Amazon Prime Instant Video for momentum, with other video streaming subscription brand - including HBO GO, Twitch.TV and Hulu Plu - also seen as “on the way up” by more than 40 percent of consumers.

“Netflix has enjoyed unopposed category dominance but the question is, how long can it sustain its astounding equity growth?” said Sinopoli. “While the overall category has room to grow with millennials and now Generation Z coming of age, Netflix will need to stay close to consumer needs or see its share and rate of growth begin to slow as newer, sometimes edgier competitors fragment the market -- not unlike what happened to major TV networks when cable offered more targeted entertainment choices.”

According to the study, while TV networks maintain its media category equity lead, various cable networks with targeted content, as well as streaming entertainment, are making inroads. And, over the last five years, social networking sites and video streaming subscriptions have built brand equity, up 9 percent and 2 percent, respectively.

“Particularly with the Brands of the Year—ABC and CBS—TV networks have experienced a slight lift in 2016,” said Sinopoli. “However, consumers tend to view factual entertainment TV, which has a lot of educational content, as having a stronger positive social impact. This likely helps to push it toward the front in equity.”

Despite its strong lead over video streaming subscriptions (EquiTrend score 68.4 versus 61.1), the Harris Poll study shows that the TV networks category will face its strongest challenge not with millennials, but with Generation Z. According to the research, millennials award a similar level of equity to TV networks as do older generations, but a sharp decline in TV network equity among Generation Z tips the scales in favor of streaming.

“While much focus has been on millennials’ media consumption, Gen Z stands to be the real disruptor,” said Sinopoli. “Among millennials and Generation Z, video streaming subscriptions have their strongest equity position, but TV networks’ equity drops dramatically among Gen Z consumers. Our research also shows that a gradual decline from the older generations to the younger in brand connection with TV networks becomes a significant decline with Gen Z. With an abundance of new media choices, such as Crunchy Roll and Twitch.tv, the mobile-first generation will accelerate media fragmentation at a speed we can barely grasp today.”
Posted 3:59:00 AM